Hello once again, fine readers, and welcome to another collection of delicious readingmeats for your brain. I’m going to forego the intro this time because I have quite a few books to draw your attention to (two of them quite weighty indeed), and only so many words available before my editor sends the attack parrots out (and I’ve grown attached to my ears). So, without further ado, the October reviews! 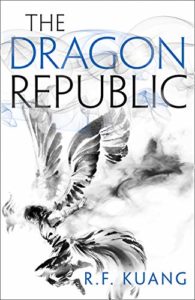 The first book I’d like to talk about is The Dragon Republic, by R.F. Kuang, and it’s the second entry in the Poppy War series (book one is The Poppy War, which you will definitely want to read first).

Reader, I cannot overemphasize how good this series is. Similar to how Game of Thrones was a distorted retelling of the War of the Roses, Kuang takes us deep into Chinese history and mythology with The Dragon Republic, referencing multiple incidents both from the formation of what would become modern day China during World War II, as well as deeper dives into folklore and mysticism from further in the region’s past.

Unlike Game of Thrones, however, The Dragon Republic (along with The Poppy War) is told from a singular perspective—that of the main character, Rin, a peasant girl from the far reaches of Nikan, who finds herself drawn into a web of magic and intrigue, gods and empresses, and an ongoing struggle to keep her country from falling to the hands of invaders (a common theme in both books, and for students of Chinese history, one very familiar).

Without giving away too much from The Poppy War, The Dragon Republic starts with Rin struggling to deal with both her power and her memories—harsh memories of war, death, and lost companions. In danger of spiraling out of control, Rin has to navigate a treacherous path between friends who might be enemies, and enemies who might be friends—but in true epic-fantasy fashion, the reader is never quite sure which is which. Add to that an intrusive foreign power with uncertain aims, and the scheming swirls thick throughout the entire story.

One of the things I most liked about this book is how it delves into the grinding, mundane terribleness of war, and the toll those constant conflicts take on Rin and those around her. Kuang does an excellent job illustrating how the act of wielding power comes at a cost, one that isn’t always the expected price, and even though there are plenty of magic spells being tossed around, it always takes a backseat to the humanity of those affected. Rin, and all the other characters, are shaped by their world just as much as they shape it, and not once did I find myself thinking, “Oh, that’s not believable” (and this in a book featuring a duel with a crazed wind-god above an epic last-stand naval battle).

Also, while there are plenty of depressing moments (as one would expect in a book about war), Kuang still makes time for brief interludes of peace, where Rin and the others dare to hope for a more permanent respite from the constant conflict they find themselves in, which goes a long way towards developing them as characters (as well as keeping the reader from succumbing to suffocating nihilism). Even though Rin’s world is bleak, I always felt there was a chance things could get better, and I can’t wait to see where the series goes from here.

I highly recommend jumping on the Poppy War bandwagon now, because with The Dragon Republic, Kuang has shown she’s only getting better with each entry.

Read if: you like loosely historical-based fantasies that aren’t afraid to toss a little magic in; you want something that’s not Western European-centric; you sometimes want to burn it all down. 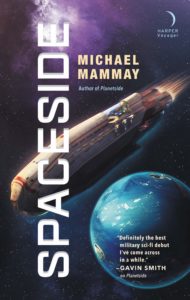 Our next book is another sequel, Spaceside, by Michael Mammy. Occurring immediately after the events of Planetside (which you can find the review for here: bit.ly/July18Reviews), Spaceside continues the journey of Colonel Carl Butler, who is struggling to deal with the momentous decision he made at the end of the first book. Cashiered from the military, he now serves as a security consultant for a corporation that may or may not have his best interests in mind. When he’s assigned to investigate a network breach, things quickly progress from “odd” to “oh crap,” and Butler has to utilize all his old skills to survive while trying to solve the mystery.

Much like Planetside, Spaceside is a satisfying SF thriller that offers plenty of action and future tech, and is well-crafted to keep the reader guessing the entire way. Mammay keeps the pace brisk, and continues to avoid the jargon-heavy style that tends to weigh similar types of books down. In addition, Spaceside has significant subtextual elements as well, this time focusing on the military-industrial complex and privatized corporate forces, which I enjoyed seeing.

However, what’s most important to me is how Mammay has Butler deal with the consequences of his actions from the first book, and I am glad to say he didn’t disappoint. In Spaceside, Mammay addresses some heavy issues with both nuance and empathy, and Butler’s attempts to reintegrate his life will likely be familiar to anyone who’s had to deal with a significant trauma. Coupled with Butler’s sudden loss of a career he’s been in almost his entire life, it’s clear that his journey back to functional will take some time, and thankfully Mammay doesn’t try to rush the process. Furthermore, the events from the first book play a critical role in setting up the finale for this book, and the way it’s handled struck me as superb.

Overall, I think this is a very solid follow-up from an author who could have easily gone in a different direction, and this is another series that I’ll gladly read further books in.

Read if: you like Space Law and Order; you appreciate a little military SF therapy now and then; you sometimes don’t want to burn it all down. And now for something completely different. A Lush and Seething Hell is a collection of two horror novellas (“The Sea Dreams It Is The Sky” and “My Heart Struck Sorrow”), by John Hornor Jacobs, and I’m not lying when I say that these stories will stick with you after you finish reading them . . . though “stick” might be the wrong word. “Wriggle under your skin and slowly writhe” is perhaps a more accurate description.

At first glance, the two novellas superficially deal with two completely different subject matters—“The Sea Dreams It Is The Sky” involves a European poet, an unsettling manuscript, and a brutal dictatorship, whereas “My Heart Struck Sorrow” is about the search for the origins of an American folk song—but the best kind of horror is never concerned with what’s going on at the surface. It’s the roiling undercurrents, dark and full of malignity, that identify excellent horror, and this is where Jacobs shines.

Both stories begin innocuously enough, though there are hints of things not quite right, then slowly descend into an unsettling mix of the everyday and the cosmically monstrous. However, the greatness of Jacobs’ writing lies in the fact that the cosmically monstrous is actually not cosmic at all—it is, at its core, humanity, pure and simple, the parts of our psyches that we pretend only exist in devils and gods. The terrible deeds that take place in these tales are not fantasy, nor are they fiction, even though they present as such. They are what we have done, are doing, and will do to each other, again and again, every time telling ourselves that it’s not us brandishing the heated poker or the slave driver’s whip.

To read A Lush and Seething Hell is to recognize that just as the human heart is capable of boundless beneficence, it also contains fathomless cruelty, and though we may try to hide from that awful truth, it always finds a way to slither through, creeping up on us when we feel ourselves most safe. I’d highly recommend consuming it with a mug of hot chocolate and a collage of puppy pictures aperitif.

Read if: you can withstand the evils that lurk in humanity’s soul; you like being unsettled; you know why the Devil went down to Georgia. 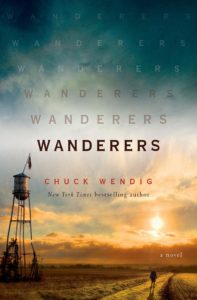 Finally, we come to the fourth book of this review, Wanderers, by Chuck Wendig (full disclosure, Chuck and I are Twitter friends). If A Lush and Seething Hell is horror as subtle abstraction, Wanderers is horror that gets in your face and Will. Not. Leave. It’s not jump scares. It’s not tentacle-bearing cultists. It’s horror in the way watching a car accident in real time is horror. You know that the thing that’s happening shouldn’t be happening, yet it’s still happening and it won’t stop.

Confession time—a lot of people, good, smart people, are comparing Wanderers to Stephen King’s The Stand. I have never read The Stand, because I can’t make it through the first two chapters. For whatever reason, it doesn’t click for me.

Wanderers absolutely clicked for me, from the beginning all the way to the last glorious few pages. This is a book that ties together fungal microbiology, cutting-edge internet memery, America’s political dysfunction, artificial intelligence, and the pervasive influence of racism in evangelical religion, just to name a few of its many subtopics, but what could have ended up as a hodgepodge of half-formed thoughts instead weaves itself into a tapestry worthy of any and all attention.

Wendig deftly combines multiple viewpoints to create a searing glance at the state of what America is, right effing now, and the writing never resorts to caricature or tropes. Every character in this tale of somnambulistic nomads, watched over by shepherds and harried by wolves, could be someone you know—for better or worse—and that’s what ultimately makes it so terrifying. Wanderers is believable in a way that William Gibson’s Neuromancer was believable; a world that initially seems fantastic, but when you stop and actually think about all the little things present, the tiny details, you realize you’re witnessing a historian from the future trying to warn you about an oncoming freight train.

I suggest you read this book and then decide whether we, as a species, should get off the tracks.

Read if: you like The Stand (I guess, don’t judge me); you’re not afraid of some spores; you want to see how an apocalypse happens.

Anyways, that’ll do it for this month’s reviews, I’m approaching my word limit and I can hear the parrots descending. Happy Halloween!