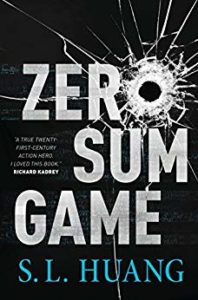 Cas Russell uses math as a power. Some narratives may feature characters utilizing math to save the day (six seasons of Numb3rs comes to mind, more recently The Librarians), and there are stories where genius “superheroes” use science, including heavy use of math, to fight villains (such as Marvel’s Amadeus Cho). Cas uses math to solve problems as well as to take physical actions: Calculations make dodges possible, enable knock-out punches, or result in a graceful dismount off a crashing motorcycle. This makes Zero Sum Game a bit more unique, as the mathematician is brought out of the office and put into the field. In fact, she’s armed with weapons and eager to fight.

Cas is enjoyable as a strong, edgy, reluctant hero. She’d rather kick down a door than pick a lock, and pointing a gun at her is a bad idea. She’s a loner who does freelance “retrieval,” whether objects or people. When she’s hired to retrieve Courtney Polk from the clutches of a Columbian drug cartel, events take unexpected turns and Cas is pulled into a much larger conspiracy. Moreover, she soon discovers someone is manipulating the minds of the people involved, including her own. Cas is forced to work with people she doesn’t trust while unsure if she can trust herself. Meanwhile, someone is trying very hard to kill her.

The one person Cas does trust is Rio, an enigmatic killer with his own code. Counterpoint to Rio is Tresting, a former cop carrying a grudge who has his own agenda, and who comes complete with a flamboyant partner. And then there’s Dawna Polk, the woman who hired Cas, and who might also be trying to kill her. In straightforward, smooth lines, interesting characters are composed, engaging conflicts flare up, and the body count rises.

Math as a power is a cool idea. Having a hero who can use it in combat is fun. Specific applications are kept simple and somewhat vague—a line about vectors and variables rushing through Cas’s head as she’s jumping through a window, for example. This makes the read uncomplicated and quick, if at times flirting with the unbelievable. At the same time, the narrative gives a deft treatment of a hero and her cohorts fighting against mental manipulation. 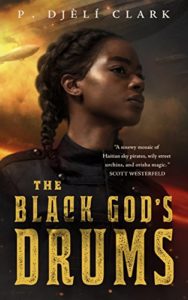 Reading The Black God’s Drums is nothing less than falling into another world. Exquisite worldbuilding offers an alternate 1884 New Orleans, one with airships in the sky and deities riding just beneath the skin. The city is a neutral ground between the confederates and “one of the few nonaligned territories in the now broken United States.” It is also surrounded by “Les Grands Murs,” giant walls built to protect against massive tempests. As a result, the same massive tempests that the walls should shield against could potentially drown the city.

Creeper roams the streets of New Orleans, a thirteen-year-old orphan with a knack for climbing and the goddess Oya riding her mind, waiting to take over. Hiding one evening in an alcove near the airship mooring masts and searching the crowds for her next mark, Creeper stumbles upon a plot to steal a magical weapon: The Black God’s Drums. Thinking this information is worth more than stolen trinkets, she tries to sell what she knows at bordello Shá Rouj, which “lets in men of any colour and offers women just the same—big Dutch gals, scarlet-haired Irish, dark senoritas, midnight-black Senegalese.” Instead of scoring a big payday, she is pulled into a quest to save the city, along with an airship captain and a wild youth raised by seer nuns.

Creeper’s New Orleans is a linguistic wonderland. The story is told in a variety of accents and dialects, lending flavor to a tale bursting with cultural plenitude, while managing to still be readable. Histories are shared, stories revealed, and as a reader, I feel as if I’ve learned while being entertained. Exploring this world with Creeper is enough to make the novella interesting.

Aiding in the telling of these stories is a striking set of memorable, unique characters. Strong women and cunning girls take leading roles, and are called to heroics as the stakes rise.

The plot ambles a bit, leaning on happenstance or luck—or perhaps it is the manipulation of goddesses. And to my thinking, while the main character is a thirteen-year-old, Creeper’s age has little impact on the story or its events, aside from occasional surprise or distrust. She never seems like someone of that age (except perhaps in one scene), and may as well be twenty or thirty.

All the same, The Black God’s Drums is thoroughly enjoyable, penned in a strong voice, with style and vision that adds much to genre. 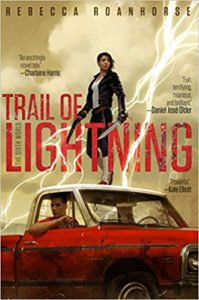 In the aftermath of a climate disaster in which large swaths of the world have drowned in a massive flood, dramatically reshaping the geopolitical landscape, Navajo gods have resurfaced. And so have Navajo monsters. Maggie Hoskie is Diné (Navajo), a flood survivor, and a monster hunter. Her tribal powers make her a gifted killer. But her past may have left her cursed, and she may be a danger to anyone who gets too close.

Trail of Lightning’s opening is tense, vivid, and effective. A desperate family enlists Maggie to rescue their kidnapped daughter. Within a few pages, we understand Maggie as an outsider, we understand her angers and complications, and we are rooting hard for her. Maggie Hoskie immediately enraptures, offering a great action hero full of promise and problems.

Maggie’s narrative co-stars are nearly as captivating as she is. Kai Arviso is the young medicine man she has to work with, despite her hesitations. He’s a flashy kid, sharply dressed, hidden behind reflective sunglasses. Then there are the gods and immortals, powerful beings with their own unknown agendas who could be worse than the monsters.

The stakes are serious. The writing is crisp. As if this weren’t enough to sell a book, there’s more.

Science fiction is rife with post-apocalyptic tales. Far fewer are the books that draw on Navajo traditions—or other indigenous cultures. Stepping into this story is entering a tradition that is often either grossly misunderstood and misrepresented or completely unacknowledged and ignored. Trail of Lightning is a well-researched, easy cultural introduction, ripe with distinct notes, subtleties, and icons. Avid genre readers will find delightful, glittering surprises, as many familiar ideas are presented in slightly different ways or with interesting twists. Word of warning: It’s still fiction.

Throughout the tale runs a powerful and multi-layered commentary on gender. Maggie is a warrior and a woman. What that means shifts from perspective to perspective, just as the way she feels about her own womanhood shifts from moment to moment, scene to scene. Where and when she fulfills expectations or resists them is complex and thought-provoking.

If you just want a kick-ass story about a warrior fighting monsters, a tale chock full of cool ideas, this is a great pick. Trail of Lightning is action-packed, well-written, and fun. It gets brutal and dark, it has moments of humor, and has plenty of great scenes. The narrative does seem to rely on random encounters or chance, especially earlier on, but the turns of plot, the details and the characterizations all make up for it. Then again, if you seek a socially conscious book, one which makes you think, and one which is likely to teach you things you didn’t know without being preachy or beating you over the head, Trail of Lightning is also for you.