The summer’s springs are winding down, though you wouldn’t know it from the weather: at time and place of writing heat warnings are in effect, presaging thunderstorms and the roulette-spin of whether or not they’ll break the humidity. In this season of storms I wanted to look at a tempestuous trio of comics ranging from sword and sorcery to space opera to quirky slice of life. 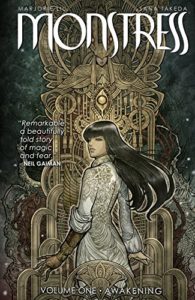 I hardly ever buy comics in single issues, preferring to wait for the trade volumes, but Monstress is so stunningly beautiful that I had to have every piece of story the moment it came out. Sana Takeda’s art is a breath-thieving marriage of Yoshitaka Amano and Sulamith Wülfing, all striking lines and soft colours in an art-deco-inspired wonderland of horrors, gorgeously matched to Marjorie Liu’s spare, understated, and often wryly funny writing.

There’s a war on between the Arcanics and the Cumaean Order—between those whose bodies contain magic and those whose science-sorcery is fuelled by it. Maika Halfwolf is an Arcanic with a secret, one that threatens to destroy her: in order to unravel its hold on her she needs to infiltrate a Cumaean stronghold and confront dimly remembered monsters from her past. Maika soon finds it’s secrets all the way down, and with the reluctant help of a fox-child and a two-tailed, poet-quoting cat, she begins piecing together truths from the shadows of her history.

It’s almost unbearable how beautifully Takeda draws horrors. The Cumaea literally lop limbs from still-living Arcanic slaves to make their lilium; Maika Halfwolf has a destructive appetite she can barely control. Indeed, the whole first issue is variations on the theme of people eating or being eaten: Maika recalls, “When we were slaves and starving, we once ate the contents of a dead boy’s stomach. We said it wasn’t like eating the boy,” before tucking into a feast of freshly slaughtered wild beasts. Neither Liu nor Takeda shy from depicting the vicious brutality of soldiers at war—but the art is so intricate, the expressions so moving, that it becomes impossible to look away.

I was so awe-struck by the visceral unity of beauty and violence that it took me a full two issues before I realised almost all the characters are women. The soldiers, the Cumaea, the chief Arcanic protagonists—all of them are women, tearing each other apart, being magnificent and monstrous together. I can’t easily articulate the effect this has had on me, except that it is desperately welcome and makes me want to stand and applaud. Monstress is far and away the best new comics series I’ve read this year, and an astonishing accomplishment. 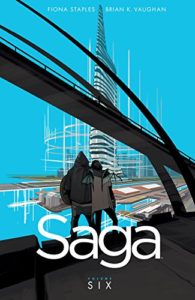 Saga is a widely acclaimed, multiple-award-sweeping series, and if you aren’t already reading it I don’t even know what to tell you. Go read it! Star-crossed lovers crossing the stars in a spaceship of living wood, trying to protect their baby! Weird sex planets! Lying cats! Mercenaries whose status is indicated by a definite article! It’s brilliant, moving, harrowing, hilarious, and the best space opera I’ve seen in comics since The Ballad of Halo Jones.

That said, I was getting a little worried about it; after a solid run of each volume surpassing the last, volume 5 made me miserable, and left me feeling as if I’d fundamentally misunderstood its deeper project. But volume 6 blew me away so thoroughly that I felt it deserved a review, even this far into the series.

Alana and Marko were soldiers on opposite sides of a generations-old war between a planet, Landfall, and its moon, Wreath, now mostly being fought by proxy on planets ever farther away from the source of the conflict. They fell in love, had a child, and are on the run from the powers that be, trying to keep their daughter, Hazel—a child born with wings and horns, characteristics of both her parents’ peoples—secret and safe. They’re hunted by princes, mercenaries, tabloid journalists, and intriguing agents of both Landfall and Wreath, all with their own agendas. By volume 6, Alana and Marko have lost track of Hazel but have reunited with each other, and are trying to get their family back together one daring information heist at a time. Meantime Hazel is a few years older, held prisoner with her grandmother on a Landfall-run re-education facility, keeping her wings bound and hidden.

What makes this volume especially interesting to me is the fact that Hazel—who up until now has been narrating the series from an undisclosed future point in time—is old enough to have a voice and agency as an on-screen character. She’s no longer only a wry scrawl of words appearing almost as whimsical footnotes to events—she’s present, active, and interacts with the narration in interesting ways. That alone would have been enough to renew my love for the whole, but the added nuance is combined with perfect heart-in-mouth pacing, wonderful twists and turns, and some amazing shifts in character design from Fiona Staples. I can’t wait for the next one. 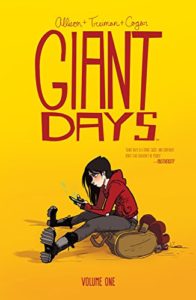 Susan, Esther, and Daisy are in their first year of university, have known each other for three weeks, and are the best of friends. Together they provoke drama, fight campus sexism, and enjoy autonomous sensory meridian responses in between bouts of campus illness and recreating the early ’90s.

It’s delicious to read a book so thoroughly dedicated to enjoying friendship. In among the hyperbolic shenanigans (always with a core grain of truth about the university experience) is real, lovely affection between three very different women supporting each other against whatever the world might bring. It’s also laugh-out-loud funny: John Allison and Lissa Treiman have between them struck the sharpest comic timing I’ve read in a while, and every single character, hero or villain, is a delight.

Profoundly charming, enormously wacky and completely hilarious, Giant Days is a rare treat. I didn’t want it to end. 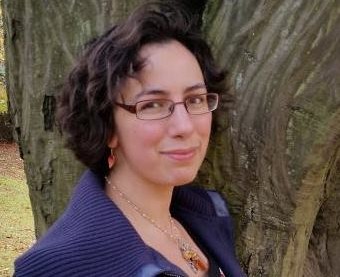