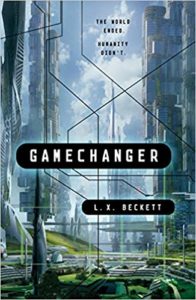 After a startling opening, Gamechanger engages the reader while syncretizing fresh takes on a ton of familiar SFnal ideas. AIs, for example; ecological disaster; the evolution of social media; futuristic economies—all topics covered in numerous stories, but this novel meticulously endows each previously seen SFnal concept with some new element or innovation, and then weaves them together into a strong, seamless narrative. The effect: As a composed whole, Gamechanger breathes new life to current conversations, while building a cohesive and quite plausible vision of the future.

Cherub Whiting (aka Rubi) is a VR sports star turned lawyer who specializes in helping troubled individuals, especially the kinds that many might find toxic or abrasive or just downright unpleasant. A new client is referred to Rubi by her (sort-of therapist) father: Luciano Pox (aka Luce). Luce, it turns out, is more unpleasant than most. In a future where the equivalent of “follows” and “likes” and so on can directly impact not only one’s social station but one’s financial well-being, Luce is in very deep trouble. Rubi travels to Paris to meet Luce in person—a rarity in this vision of the future, as not everyone can justify, let alone afford, burning jet fuel—but Luce misses their first meeting. In doing so, he also dodges the authorities, who seem to think he’s some kind of terrorist. Meanwhile, Luce tells Rubi’s dad that he’s being messed with, manipulated, or worse. A deeper mystery starts to develop, the plot thickens, and after an attack at a park, the stakes get serious.

Cool concepts and ideas abound, and most are the kind you can actually see coming true. VR sports stars, apps for managing health and happiness, virtual parties, post-ecological disaster economies, and so on. The story delves a lot into VR bits, which many readers will find fascinating and fun. Settings (especially real ones but also VR ones) are crisp and interesting, navigated by characters who are sharp and believable, and about as messed up (read: complex) as you might want them to be. But this isn’t a fluffy “check out my cool ideas!” kind of book. It’s got an interesting plot for a spine (despite a few jarring transitions) and tackles mental health, social conventions, identity, ecological technology, and much more.

Lots of little linguistic details sparkle through the read, the kind of cool lingo which anyone fluent in social media or gaming can easily interpret from context; the kind of stuff that makes you want to start using them with your friends—similar to the effect of 1971’s cinematic A Clockwork Orange, which had people calling each other droogs. The drawback might be that readers completely unfamiliar with social media, gaming, and similar current popular cultural elements could struggle, or at least stutter a bit through the read. But a beginner’s familiarity is enough to be delighted by these embellishments. In fact, I fully expect that if my friends read this book, we’ll end up using some of these terms.

While many readers will relish the tech, or the jabs at current political situations, or the kind-of-amazing futurist vision, the heart of the story is really people (even if some people may be AIs). The way people live in and interact with this future, the way they relate to each other, the way they raise families, the way they love; the stresses and struggles of living and actually making it or, for that matter, just surviving.

Gamechanger is a science fiction book with a lot going on, chock full of ideas to chew on, and can satisfy readers who love futurist fiction on that level. But it’s also a book with heart. 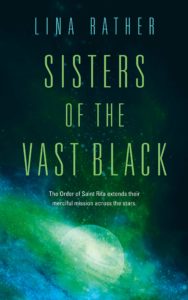 This book, simply put, is just so thoroughly interesting. In a smooth narrative, characters are quickly but effectively drawn, characters who prove to be unexpected, but believable and downright fascinating. Story events are captivating, story problems are approached from a slightly different angle, and while some plot points will likely be guessed at, others will surprise the reader; yet they all remain in line with the setup. The author plays fair with the reader, while presenting ideas and thoughts and moments which feel unique and unusual.

Far in the future, a group of nuns who travel to colony planets on missions of mercy receive a request: three marriages and a baptism. This comes at a time when the nuns are deadlocked on an important philosophical debate, a decision which has to be made, one which may drastically affect all of them; and, perhaps far worse, soon after the request, news arrives that a new priest has been assigned to them. Politics unfold, personal conflicts rise, interpersonal drama digs deeper, and, oh yes, plagues.

Okay. Nuns in space. What comes to mind is a lot of pulp, fun images: nuns firing massive laser cannons, their habits kind of floating, an angry howl captured by their bubble space helmets. Sure; but actually, not at all. The nuns in Sisters of the Vast Black are wonderful characters, closer to real people, deliberately avoiding archetypes. Well-fleshed out despite the short length, and nicely complex. They share quarters inside a living ship—and I am dying to explain to you all about the ship, but it’s so cool that it needs to be left out. You’ve seen concepts of living ships before, but the nuances here, the details make the experience of the read special. Unlike many a science fiction story, where characters and narrative are just thin excuses to dapple pages in gleaming science fictional ideas, the SF here is grounded, relevant to plot and character, important beyond just coolness, yet still evoking that sense of wonder we crave.

We ride with the nuns as they grapple with themselves, with each other, and with fundamental concepts which are, when you step back and look at it, unavoidable in the situations in which they live. Meanwhile, in deft strokes, world-building elements are filled out: revolutions, war, movements within the church, and it all gets brought to bear as meaningful and relevant to the story at hand. Plus: a potential conspiracy! Simply put, it’s all well thought out and well done. 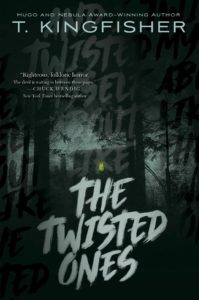 You might have bad relatives, but not like Mouse. When Mouse’s dad asks her to deal with her recently deceased grandmother’s house, Mouse packs up her dog Bongo (who is perhaps the most important character in the story) and heads out to the middle-of-nowhere America. She discovers that not only was grandma an astonishingly expert misanthrope, but she dual-classed in hoarder. Worse, after a hard day’s labor, as soon as Mouse attempts to settle in amidst the stacks of papers, overfilled drawers, and much, much more, things start to get strange.

The Twisted Ones, for the most part, opens with classic horror structure, starting out with that standard type of horror story mystery: What are those noises, what are those things running through the woods, just what were grandma and her old lover Cotgrave up to, anyways? The tone is conversational, Mouse speaking directly to the reader. Inevitably Mouse (properly: Melissa, but Mouse works better) is lured in to investigate these mysterious things, these creepy things which are disrupting her dismantling of grandma’s collections.

Mouse as POV heroine is clever, likeable, and funny. Her storytelling is entertaining; also, we feel for her predicament. Her dog is absolutely loveable. In fact, I thought at times of Dean Koontz’s One Door Away From Heaven, in which the dog was a POV character and central to the plot. If I had one complaint, it might be that Bongo drives the story a smidge too much for my taste. Nonetheless, all the side characters are interesting and cool and the interactions between characters are great examples of solid story driven by good dialogue.

As the story progresses, and as we meet monsters and delve into the history of the house and its people, the text veers into weird fiction territory. Horror moods meet “weird genre” moods and the resulting effect is absolutely lovely. But we’re not done. Deeper yet into the narrative we go, and the story goes farther, all the way into “dark fairy tale” if anything, not to mention stories within stories within stories. Okay—It’s a lot. But it all works together and it works together well. Moreover, tones shift where they should and narrative styles are varied where they should be, making the phases of the story work even better.

Some of the reveals are obvious and some are interesting treats. The creatures are intriguing and innovative in delightful ways. The tale is very visual, and effectively so. There are also layers of subtext at play, if I’m not wrong, not all of which I entirely peeled back. And for readers far more erudite than I, it’s built on classic narratives, and will likely be even more layered and interesting for it.

While being an expertly crafted and structured piece, for me, it’s really the characters and the voice which make this story work so well. I described the narrative voice and the overall style to a friend, who said, “Yep, sounds like the Kingfisher thing.” I honestly felt like I’ve been missing out.

As horror goes, I am not the type to lie to you: This book may scare the easily susceptible, the folks who shiver at the thought of scratches outside the second story window at night, or shudder at the suggestion of some creature limping through the woods just beyond the light. For seasoned, hard-hearted horror readers (such as myself) it’s not scary at all, but it’s still a whole lotta fun, a whole lotta interesting, and a horror-wonder-filled read. It’s deceptively elegant and kind of beautiful and Kingfisher makes it look easy.