I read Delany’s legendary novel Dhalgren, published in 1974, for the first time on the way to Readercon 2015, after a friend told me they were seeking a writer of color to add to a panel on the novel. Surprised they hadn’t thought of that sooner, I found out that they’d been looking at length, but hadn’t found any of us who’d read it or were willing to take it on for that. For the POC writing community, I decided to throw myself on the grenade of reading in a day a novel over a thousand pages long in ebook with a reputation as being “difficult.” Like the Statue of Liberty I always see from the elevated F train, I knew it was important, but getting to it had always seemed like too much trouble.

I’m glad I finally did.

Blessed with reading quickly with comprehension, I started it on the train up to the convention and finished a bare hour before the panel began the next day. Reading it nonstop was remarkable, and I recommend doing Dhalgren over a three-day weekend with no other plans, like mescaline or mushrooms. The novel takes you through multiple stages of reality and is like a hallucinogenic trip in its nuance, range of experience, and the way it sucks you into an alternate reality. I want to offer a possible key to unlocking it for new readers of all races, but particularly of color, as it is part of our literary legacy, in order to encourage you to forget its reputation and read a justifiably renowned work of prose poetry that was a bestseller when it came out.

Landy, the hero Kid’s first lover in the lost city of Bellona, says about his work, “I’m delighted by its skill and moved by its wealth of substance, which surprised me because I didn’t think I was going to be.” That’s how I felt, having heard Dhalgren was going to be hard to get through, but I was quickly pulled in. The trick is not to tarry over the early text for meaning, but to keep moving. This is word jazz, like the cut-up novels of William Burroughs such as Nova Express, or Kerouac’s On the Road. Just go with the flow. These are the disoriented thoughts of an amnesiac. You’ll find familiar ground when Kid does, after he reaches Bellona.

It’s eerily contemporary. As I read Kid’s arrival I thought of Detroit, Baltimore, Flint, New Orleans . . . I see Bellona as where a lot of spiraling American cities are right now. Despite that, Dhalgren isn’t your usual dystopian novel; at the end, life goes on. There are cataclysmic events, looming catastrophe, but more as a sideshow to the characters’ lives than an actual end to their world.

Our hero enters a society that’s dissipated, but it’s stagnant decay, collapsed entropy that’s fallen as far as it can and can’t get up the strength to release the last of its energy. There’s no real order, but the city functions, citizens still sustain themselves. The first thing new people are asked is, “Are you hungry? We can feed you.”

The level of danger has escalated to snipers and street fights, but it’s a vague violence at the same level as that of New York or L.A., where you hear of gangs and shootings, but usually elsewhere. This is an everyday apocalypse where everyone goes about his or her business. They have random conversations we’ve all had, which gives it a wonderfully prosaic style that’s easy to identify with because we’ve lived those moments, we’ve had those conversations, and we’ve tumbled in and out of those beds.

To me, Dhalgren is a surrealist prose opera—a series of Socratic debates punctuated by self-defining arias. One of my favorite passages is when the seemingly deluded Mrs. Richards goes on for pages that explicitly make it clear that she understands everything going on in her world and that she’s rejected it, that she is embracing the opposite of entropy.

She’s clinging to a system that no longer exists, writing letters to building management to move upstairs in a city that doesn’t even have a police force, and each of the characters gets their spotlight. Everyone tells Kid who they are, what they are, what they believe, and it’s not until the end that he gets to say, “I know who I am”, as if hearing all their stories and writing them down is what tells him who he is. That’s when Kid can leave Bellona, after his work has given him an identity.

He begins writing almost unconsciously, as in a surrealist dream state, strings of words that express images and ideas, built around work found in the pages of an anonymous notebook he finds on his arrival that mysteriously may or may not be his own, words eventually even published as his.

Encouraged by the acclaimed poet Ernest Newboy, who leads him through the processes of publication and public perception, The Kid or Kidd—creative child or plagiarizing pirate?—finds success based more on others’ ideas of who and what he is than his own, which leads him to a deeper, truer examination of himself, his world, and his ability to represent it in words.

Presented as a Candide-like naïf when he walks in, Kid writes short blasts of poetry that are transcendent, and then the narrative goes back to “he scratched his ass.” That phasing between the sacred and profane—from what I call the characters’ arias, and the poetic bursts of divine revelation that are Kid’s arias spread throughout the book, to the ordinary world we know—is what makes the novel so effective. It’s a place that’s alien in many ways, but completely familiar in all others. Delany places Bellona so firmly in real life that you can’t tell where fantasy begins or ends, which is what makes it feel so believable.

From the snatches we see of Kid’s work in the first half of the novel, we move on to snippets of prose written in the first person as if from his notebook. It is content freed of form, the kind of reportage found in writers’ journals, threads of life we weave into narrative. The reader moves from a story about a writer’s life to his own words on his world—from outside Kid we go inside him to a deeper truth, no matter how fragmentary.

Though he cannot fully name himself by the end, he finds himself, and in that discovery is freed to leave and pass the torch, in this case the ominous orchid, on to the next generation. His words to Bill, “I know . . . who I am now. Who are you?” issue the challenge all effective authors offer their readers. Essentially it’s what Kid is asked as he arrives and what he asks of the next travelers to Bellona who he meets as he departs.

Dhalgren takes root and blossoms in the mind of the reader. It plants so many ideas that it takes time for some to become recognizable. I suspect that each time I read it, the novel could reveal something new, but after this reading I feel what Delany says is that a writer must abandon traditional roads to find his or her voice, and to seek literary freedom and success by entering unknown territory unafraid.

At heart, I see Dhalgren as an epic tale of the rite of passage every serious writer takes, Orpheus’s descent into the underworld as a search for self, for lost identity and not lost love. Kid’s journey to and through Bellona, named for a goddess of war, is the rocky road every storyteller travels. A writer’s purpose is to discover who they are, what they have to say and how to say it. Dhalgren portrays that in a poetic epic that carries its hero from amnesia to absolute awareness. Far from being difficult, it is essential reading for any writer seeking a way through the art, craft, and consequences of writing, if nothing else as a joyous example of the infinite potential of the written word.

This is the spine of the story’s skeleton for me, the arc it follows from beginning to end. Delany’s lyrical prose is laid over that, philosophical passages that require deeper, more detailed examination to be fully appreciated. These are the parts of the book readers go back to reread and what I intend to revisit over time, sure I will find new meaning each time I do.

That is what makes it a classic, one to be read, and I’m glad I finally did. 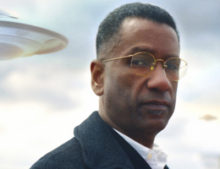 Terence Taylor (terencetaylor.com) is an award-winning children’s television writer whose work has appeared on PBS, Nickelodeon, and Disney, among many others. As an author of fiction, his first published short story, “Plaything,” appeared in Dark Dreams, the first horror/suspense anthology of African-American authors. He was one of a handful of authors to be included in the next two volumes, with The Share in Voices from the Other Side and “WET PAIN” in Whispers in the Night. Terence is also author of the first two novels of his Vampire Testaments trilogy, Bite Marks, and Blood Pressure.  After a two-year hiatus he has returned to the conclusion, Past Life. Find him on Twitter @vamptestaments.