Welcome to issue fifty-two of Lightspeed!

The 2014 Hugo Awards were presented at Worldcon in London last month. Prior to this year, it’s been my great honor to have been nominated for six Hugo Awards for editing: three for Lightspeed in the Semiprozine category and three for myself personally in the Best Editor (Short Form) category. Up until now, both Lightspeed and myself had each been 0-3 in our respective categories.

If you’re reading this editorial then you probably already know that this year both Lightspeed and I were again nominated in the two aforementioned categories. But now THE STREAK HAS BEEN BROKEN: Lightspeed won the Hugo Award for Best Semiprozine! I immediately started a new losing streak by losing the Best Editor (Short Form) award to Ellen Datlow, but naturally I’m thrilled that Lightspeed took home the prize. And honestly if I’d had to choose which of the two categories I would win, I would definitely have chosen Lightspeed winning Best Semiprozine, so I’m not even a little bit sad.

I wasn’t able to be in London for Worldcon this year to accept the award in person, but Lightspeed’s Podcast Producer, Stefan Rudnicki, was there and accepted on behalf of the magazine.

Here’s our Hugo, in the hands of Stefan himself: 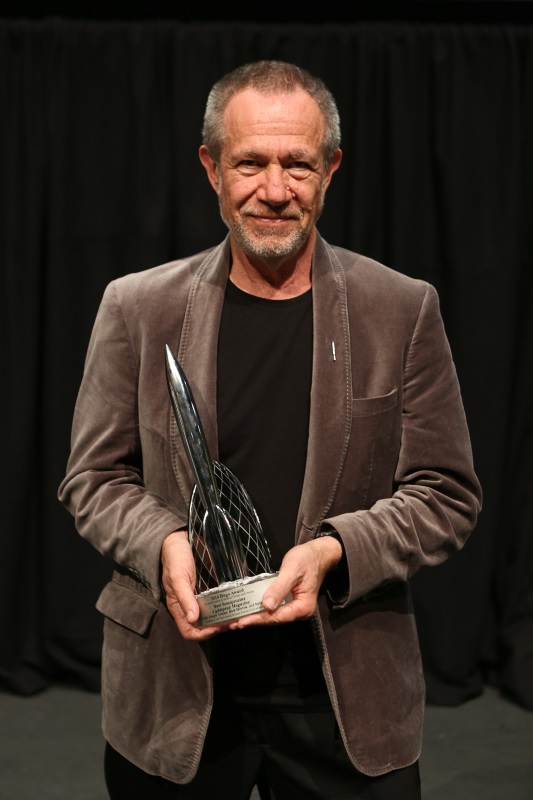 Here’s a zoomed-in shot of the Hugo itself so you can see the plaque. 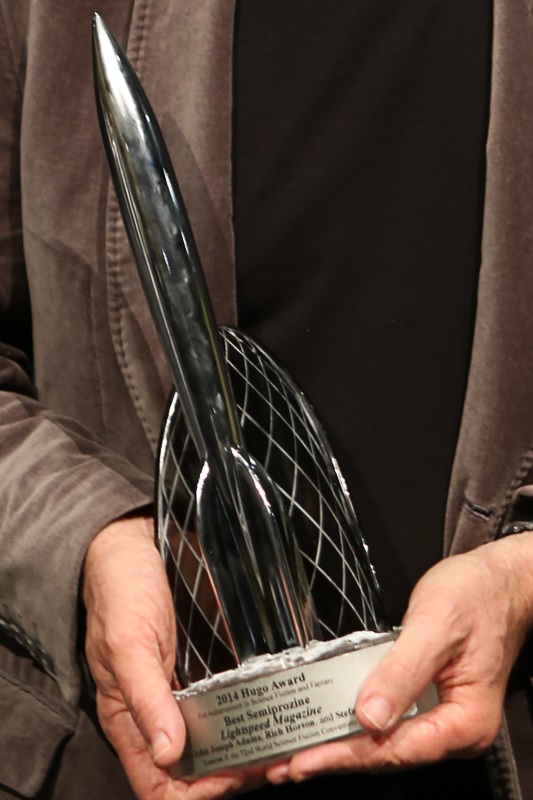 Thanks again so much to everyone who reads and who voted for Lightspeed, and, of course, to all of the amazing authors who have helped make it possible by allowing us to feature their work. We salute you!

Lightspeed might seem like it’s a one-man show, but it very much is not—it’s a huge collaborative project, and it could not exist if not for the diligent efforts of many, many individuals behind the scenes, including Wendy N. Wagner, Christie Yant, Rich Horton, Stefan Rudnicki, Robyn Lupo, Jim Freund, Karen Jones, Andrew Liptak, Jude Griffin, Laurel Amberdine, Dana Watson, Anthony Cardno, Jeremiah Tolbert, and many others. Let us all also salute them.

In other happy news, our sister magazine Nightmare is now available as a subscription via Amazon.com! The Kindle Periodicals division has been closed to new magazines for quite a while now (and has been since before Nightmare launched), but by employing some witchcraft we were able to get the doors unlocked just long enough for us to slip into the castle. Amazon subscriptions are billed monthly, at $1.99 per issue, and are available now. To learn more, please visit nightmare-magazine.com/subscribe.

To learn more about these and our other subscription options, please visit lightspeedmagazine.com/subscribe.

We have original science fiction by Saundra Mitchell (“Starfall”) and Sam J. Miller (“We Are the Cloud”), along with SF reprints from the new anthologies: Monstrous Affections (Holly Black’s “Ten Rules for Being an Intergalactic Smuggler (the Successful Kind)”) and the aforementioned The End is Now (Tananarive Due’s “Herd Immunity”).

Plus, we have original fantasy by Sarah Pinsker (“No Lonely Seafarer”) and Matthew Hughes (“Under the Scab”), and fantasy reprints by Aliette de Bodard (“Prayers of Forges and Furnaces”) and Rhys Hughes (“Eternal Horizon”).

All that, and of course we also have our usual assortment of author and artist spotlights, along with feature interviews with authors Mary Robinette Kowal and Diana Gabaldon.

For our ebook readers, we also have a reprint of the novella “Giliad” by Gregory Feeley, and novel excerpts from The Brothers Cabal by Jonathan L. Howard and The Necromancer Candle by Randy McCharles.

Our issue this month is sponsored by our friends at EDGE Science Fiction and Fantasy Publishing. This month, make sure to look for the aforementioned The Necromancer Candle by Randy McCharles. Learn more from EDGE at edgewebsite.com.