Immortals That Show Us That Death Is The Best Option

Eternal life seems like the sweetest of sweet deals. You get to go everywhere, do everything, and collect stories you’ll be telling at parties for millennia. But before you sign up for immortality, be forewarned: It isn’t all it’s cracked up to be. Even in the comparatively sweet world of fiction there are plenty of souls embittered by immortality. In the words of Queen, who wants to live forever? Not these folks. And here’s why.

It Can Get All Gross and Stuff

The things you have to go through to live forever make you wonder if it’s worth the effort. Vampirism is the most obvious example: Sure, you get eternal life plus super-powers (superhuman strength, turning into a bat, the currently popular Sunlight Sparkle), but you have to drink all that darn blood. In the Guillermo del Toro film Cronos, people achieve immortality through a device invented by a medieval alchemist—but they develop a vampiric need for fresh blood. In the 1960 B-movie The Leech Woman, a woman keeps herself young through a secret African formula of orchid pollen and pineal juice. She has to keep killing men for their pineal glands, which you can only do for so long before the cops get suspicious. Their version of immortality isn’t a long, sumptuous meal, but a hamster wheel, speeding ever faster but impossible to jump off of.

If you’re immortal, but your powers of healing remain normal, you can look forward to racking up unsightly injuries throughout eternity. The film Death Becomes Her pushes this to the extreme, with Meryl Streep and Goldie Hawn walking off broken necks and shotgun blasts through the midriff. Ultimately, they realize that their immortal bodies will require constant maintenance just to stay in one piece. In the words of the two immortal murderesses, “Who could have imagined. You and me, together. Painting each other’s asses. Day and night. Forever.” Doesn’t sound like much fun.

But at least they don’t actively decompose. Remaining conscious in a rotting zombie body may be the most unappealing option of all. In H.P. Lovecraft’s 1928 story “Cool Air,” the undead Dr. Muñoz can live indefinitely as long as he manages to protect his body from decay; trouble arrives when his air conditioning goes out.

Even invulnerability can be a pain—literally. Take Wolverine of the X-Men. His “healing factor” allows him to regenerate from almost any injury and makes him effectively immortal. Which is exactly why the Weapon X project kidnapped him, peeled off his skin, and poured molten metal all over his bones. Pretty brutal for Canadians.

Finances Are a Headache

Most people assume that, given endless time, they can easily become millionaires. Just put a few bucks into an interest-bearing account, wait a couple of centuries, and you’ll have a fortune, right? Charles Forrester, the cryogenically preserved hero of Frederik Pohl’s novel The Age of the Pussyfoot, is delighted to learn that he’s accumulated a quarter of a million dollars while in deep freeze. Only after he’s spent most of it does he learn that, with inflation, $250,000 isn’t much money.

And you won’t even get to spend your pathetic hoard if people don’t believe you’re the same person who opened that bank account 200 years ago. In Neil Gaiman’s Sandman comics, the immortal Hob Gadling has to periodically fake his own death and come back as his own heir.

With all the hassle, it’s tempting to just come out as immortal. It could be a sweet deal; you might get to go on talk shows and have paparazzi make up stories about you in Us Weekly. Or you could end up like Robert Heinlein’s eugenically-created Howard families, who are hunted down by their neighbors and the government when some of them decide to spill the beans. And they’re not even immortal, just ridiculously long-lived.

All Your Friends Are Dead…

One of the oft-cited problems of immortality is having to go to so many funerals. It’s a drag making friends when they’re just going to die on you. The elves in Tolkien’s The Lord of the Rings, being naturally immortal, are generally sanguine about living forever, but even they get all emo about their dead mortal friends and lost loves.

Naturally, it’s even harder for people who weren’t born to immortality. If you live long enough, you could end up like the title character in L. Sprague de Camp’s story “The Gnarly Man,” an immortal Neanderthal who has outlived his entire species. “The main trouble is the shirts,” he tells a pair of scientists. “Just try to buy a shirt with a twenty neck and a twenty-nine sleeve.”

…Except Other Immortals, Who Are Jerks

No big deal, right? You’ll just socialize with other immortals. Unless, of course, you’re in a Highlander situation, and your fellow immortals are trying to kill each other because of some annoying prophecy which states “there can be only one.” Your mixers will never end well.

Maybe other immortals aren’t out to get you. Maybe they’re just jerks. Think of the legendary Flying Dutchman, a ship condemned to sail the seas until its captain finds true love. As Tom Holt’s novel Flying Dutch points out, this means that the crew has to spend eternity together, which gets old even if the Dutchmen don’t. Holt’s sailors have an additional problem: The alchemical potion that gave them immortality also makes them stink to high heaven, which is the real reason no port will allow them to dock.

Still not convinced? Chew on this: Steven Seagal—yes, the Steven Seagal—has joined the “Russia 2045” movement, dedicated to making Russia the center of immortality research, and recently petitioned Vladimir Putin to put more funding into finding the secret to immortality. So if you become immortal, expect to spend the next few thousand years hanging out with Steven Seagal and Vladimir Putin. Which might actually, come to think of it, be awesome.

There’s Nothing New on TV

Every immortal, sooner or later, faces the problem of filling yet another afternoon. In John Varley’s “Eight Worlds” stories, where everyone is functionally immortal, the most common cause of death is suicide from boredom. (Even with instant sex-change technology at their disposal!)

In Douglas Adams’ The Hitchhiker’s Guide to the Galaxy series, Wowbagger the Infinitely Prolonged, who came by his immortality by being the unfortunate victim of a workplace accident, finds himself looping endlessly through time with nothing to do. “In the end it was Sunday afternoons that he couldn’t cope with, and that terrible listlessness which starts to set in at about 2:55 P.M. … as you stare at the clock the hands will move relentlessly on to four o’clock, and you will enter the long dark teatime of the soul.” Wowbagger decides to keep busy by embarking on a quest to insult everyone in the universe, proving once again that All Immortals Are Jerks.

Jorge Luis Borges’ story “The Immortal” introduces an entire city of immortals who have gotten so bored they no longer bother to move or speak. Even the great poet Homer, after thousands of years of life, has devolved into a caveman who sits like a rock all day. You think you’re better at entertaining yourself than Homer? Good luck.

It was kind of weird in high school when you were a senior and you took a freshman to the yearbook club’s wrap party. It’s really weird when you’re 400 years old and dating a twenty-something. Plus there’s the whole thing where your date ages and dies.

In the recent seasons of Doctor Who, that’s the explanation the Doctor has given for never getting steamy with his human Companions: mortal/immortal pairings just bring up too many nasty ethical questions. Yet despite his upright morality, the Doctor continues to pick Companions who mostly happen to be hot girls.

You could avoid these problems by dating only fellow immortals, but beware: Other Immortals Are Jerks, as previously discussed.

You Could Get Stuck at a Non-Fun Age

When you achieve immortality, be sure to specify eternal youth, not just eternal life. Shoot for the popular 18-35 range if possible. Jonathan Swift explored the crumminess of the alternative in Gulliver’s Travels. On the Island of Immortals, some people live forever but keep getting older, becoming helpless, senile, and as crabby as a person who’s had uncontrollable bowels for over 500 years can get.

On the opposite end of the spectrum, you could get stuck as a permanent child. Ray Bradbury’s story “Hail and Farewell” presents the dilemma of an immortal who stops aging at 12. He finds a niche for himself as an eternal foster child to lonely couples, but is there any worse fate than going through early puberty forever? Claudia, the prepubescent vampire “daughter” in Anne Rice’s Interview with the Vampire, turns bitter and murderous as she realizes that she’s an intelligent, ambitious woman trapped permanently in the body of a little girl. Looking at the dresses they put on Kirsten Dunst in the movie, it’s hard to blame her.

Given all the time in the universe, will you eventually go nuts? Insanity is a common fate of vampires and other immortals who have to do horrible things just to stay alive. The RPG Vampire: The Masquerade includes an entire clan, the Malkavians, whose members are completely insane, and many of the other clans suffer from mental disorders.

In the DC Comics universe, the Lazarus Pits rejuvenate people at the cost of temporary insanity. This hasn’t stopped the Pits’ main client, supervillain Ra’s al Ghul, from using them to resurrect himself over and over. His arch-foe Batman would say that Ra’s is permanently mad from all the rejuvenations, but can you trust a psychiatric diagnosis from a man dressed as a giant bat?

Maybe the human mind just isn’t built to last forever. In “The Jaunt,” one of Stephen King’s creepiest short stories, scientists can’t figure out why the human subjects of their teleporter technology all come back insane—until they figure out that while the teleportation takes only seconds in our time, the time inside Jaunt-space stretches forever.

But don’t let the threat of eternal torment stop you. With a positive attitude and a sociopathic indifference to the fate of your merely-mortal loved ones, immortality can be fun. As Queen sings in “Princes of the Universe”: everyone wants to live forever.

That’s right: Queen contradicted itself. In the same album. 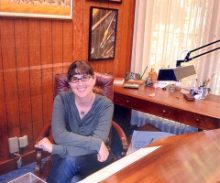 Shaenon K. Garrity is a cartoonist best known for the webcomics Narbonic and Skin Horse. Her prose fiction has appeared in publications including Strange Horizons, Lightspeed, Escape Pod, Drabblecast, and the Unidentified Funny Objects anthologies. She lives in Berkeley with a cat, a man and a boy.