It would be easy and a tad hacky to go on and on about Star Trek’s influence over fifty years of broadcast. Everyone knows that. Which is probably why every fan, at some time or another, imagined themselves on the bridge of a ship, boldly going and all that jazz. If you were already someone who enjoyed the occasional or even regular pen-and-paper-style roleplaying game, a Star Trek RPG was a no-brainer. Which is why it is so staggering that it took until 2018 and Modiphius to make one that was actually playable—dare I say, even enjoyable. One of the hindrances of a Star Trek RPG was the very thing that inspired it: the show. Even if your group didn’t have a desire to roleplay as Kirk, Spock, McCoy, or any of the primary cast, you still wanted your role to matter. Which tended to create the “too many captains” issue, leaving one person to call all the shots and everyone else essentially playing second fiddle to them. It turned everyone into a Chakotay.

Star Trek Adventures doesn’t fully change that issue within the game, but it does find a creative way around that hurdle. In addition to creating your primary character, the game also encourages players and the gamemaster to generate secondary characters. So, while your dashing Andorian captain might make some of the big calls or beam down to an alien world, your secondary character makes sure you’re still involved when the GM shifts scenes. While running multiple characters in most RPGs makes for lackluster roleplaying opportunities, the exact opposite happens in Star Trek Adventures. The game creates a truly encompassing narrative that enriches every aspect of play and the actions of one of your characters influence everyone else.

Much of that narrative building happens within the deceptively simple character creation process. Like most games, the character creation process starts with simple concepts. Pick a species, an environment and background with which you grew up, a rank, and current assignment. These initial concepts help shape the path you will take during creation. And the game allows and even suggests playing against type. Want to play a Klingon who grew up in a Vulcan embassy? Fine, that might mean you aren’t as emotionally driven as your average Klingon, and it may also influence your view on the concept of honor and warfare as a necessary element to a society. Your rank will also influence how many points, Values, Focuses, and Talents you receive. While this generally means whoever plays a high-ranking character starts with a few more abilities, these abilities will also come with more baggage that can and will come into play in the game proper.

You learn quickly much of the game is story-, not stat-, driven. A prime example is the Values system. Rather than applying numbers to a specific set of skills, Star Trek Adventures presents a list of Values, which are abstract concepts like “Crew over command” or “My ship is my family” that can give you a bonus to an action or way to aid another. The same is said with Focus and Talents, with one playing towards personal interaction and the other often associated with tasks and missions. Again, both are based on concepts like “Cultural Understanding” or “Veteran” and require some creativity by both the player and GM during game play. It’s intimidating at first, especially to those new to roleplaying games. However, after only a few sessions, even the new players in my group are leaning into their characters and applying these elements, reflecting character growth within the show. The Attributes and Discipline statistics are the number-focused element of creation and creates the element of chance in the game.

While the die system is rather simple, it’s also the one place where the game has a small slip-up. To make any check in the game, you add up the corresponding Attribute (from a 1 to a 12) and the Discipline (from a 1 to a 5) and then roll two D20s and try to get under that number. Depending on the difficulty, the GM may require from one to three successes. The player may also have the ship help with certain checks, applying similar ship-based statistics to the roll. The game falters a bit in that many of the checks are based on what skills the GM thinks is needed. Scanning for Romulan life signs in that derelict ship? Well, the GM could ask for a Control+Science roll, but also maybe a Control+Medicine? There are few hard and fast rules on what kind of check is needed and that can leave some characters sticking to the bridge and making the bulk of the checks. The addition of Momentum and Threats does add a nice level of heroics or tension to the check. The players may spend Momentum to add a die to their roll or even expand upon the success of a roll, whereas the GM can burn Threats to add to the dramatic purpose or land a gut punch when appropriate. The Enterprise escaping the Genesis wave, but at the cost of Mr. Spock, is a rather dramatic but perfect example of the Momentum and Threat system in play.

So why would we review an RPG that is already over two years old? For one, Star Trek Adventures didn’t receive the debut fanfare it deserves, being a truly elegant system that finally gets Star Trek correct. But in this age of social distancing with all human interaction happening via video conferencing apps, Star Trek Adventures truly has a moment to shine. While the game has rules for battle maps and miniatures, it thrives within the mind’s eye. With only a couple of D20s, D6s, and readily available PDF copies, it’s easier than ever for you and your friends to boldly go. Even if you’ve never picked up an RPG, Star Trek Adventures will make your journey an easy and enjoyable one. More than that, there is something wholly wonderful and inspiring to watch your friends discuss and debate moral and ethical issues in the grandest of Star Trek traditions. We have always looked to the stars for inspiration and even now, physically isolated, Star Trek Adventures allows us to keep dreaming.

To forever explore the human condition. 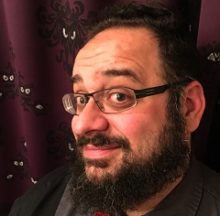 Aaron Duran is a writer in Portland, OR. He’s the founder and co-host of the popular podcast, Geek in the City Radio. Aaron is an author of multiple comic books for Image Comics and Acclaim Entertainment, including his creator-owned series The Pirates of Kadath, as well as the Forgotten Tyrs young adult horror series of novels. Aaron draws much of his literary inspiration from the creepy folktales told to him by his small but feisty abuela. When he isn’t writing, you can find Aaron in the kitchen, where he spends time coming up with tasty recipes and experimental beer and cider brewing for his incredibly supportive wife to enjoy.