The Radioactive Mutant Sub-Genre Strikes Again: Fury Road and the Persistence of the Post-Apocalyptic Roadtrip Movie 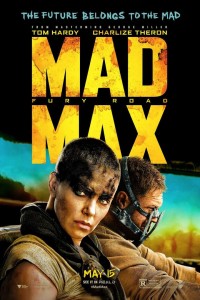 Let me just get this out of the way up front: I love this movie. First off, I think it’s a really good movie. But also because I love this genre: the Post-Apocalyptic Roadtrip Movie. More about that in a little bit.

The rundown: Itinerate post-apocalyptic road warrior Max Rockatansky is captured by the crazed cult of the Citadel, led by Immortan Joe, who maintains control of a chaotic population through a religious narrative promising eternal life to those who die in his name. He’s also in possession of five beautiful young women who decide they do not like being his property. They mount a secret escape with the help of one of Joe’s lieutenants, the Imperator Furiosa. Thus begins a massive car-chase-cum-battle that rages for the rest of the movie. Max is thrown together with Furiosa and the Wives. They eventually learn to trust each other, since they must cooperate to win their freedom. Joining them along the way is a turncoat War Boy called Nux and a motorcycle gang of the most kickass middle-aged-to-old women you have ever seen on film: the Vuvalini. The Green Place, the Eden that Furiosa has promised to guide everyone to, turns out not to exist. Max must then convince an emotionally destroyed Furiosa that their best chance lies behind them: Return to the undefended Citadel and take it over, using its resources to build their better world.

This is what happens, but the real story is in the linked arcs of the three main characters. Furiosa’s lifelong goal turns out to be an illusion, and in order to achieve the redemption she must find a new goal. Nux’s entire religious outlook is shattered, and he must find a new reason to fight: love and community rather than war and death. And Max: At the start of the film, Max has been reduced to little more than a caged animal. He spends much of the movie nonverbal—when he encounters Furiosa and the Wives, he can’t even ask them to cut his chain, he can only hold it up and grunt. So Max must learn to be human again, learn to be part of a community again—and learn that it’s worthwhile to do so. The climactic moment of the entire film is when he tells Furiosa his name, which he had refused to do earlier. All the characters are making emotional journeys literalized by the breakneck action they’re caught up in.

Much has been said of what a great action movie this is. I think this is because it’s a very clean action movie—there’s no shaky cam. You can follow movement, see what’s happening, understand the sequence of every fight and car crash. I also contend that the action is so great because it’s got a great story serving as a framework: We understand the characters, what they’re doing, and why they’re doing it. The story unfolds as the action does, and it simply makes sense. This shouldn’t be such a high bar to clear, but in the bombastic age of summer FX blockbusters we’ve experienced over the last ten years or so, Fury Road is wondrous in its lack of pretention combined with technical and storytelling skill. It’s full of the joy of a simple story well told.

Tens of thousands of words of analysis have already been spent on this film, and I’m tempted to rehash/consolidate some of those issues all over again: the movie’s feminism, issues of representation, its story (or alleged lack thereof), the idea that Max has been set aside in his own movie, the action and why it’s so damn good. I could spend a thousand words just writing about how glorious it is being a forty-two-year-old woman watching the Vuvalini in action as a seamless and unapologetic part of the story. I’m at the age when Hollywood starts telling me that my life is no longer interesting. The Vuvalini have a bullet for that kind of thinking, right in the medulla.

But I’m going to talk about something completely different instead.

The character of Max generates so much attention and adoration because the first film in this series, 1979’s Mad Max, codified an entire aesthetic, pulling together existing tropes and details that then became de rigueur. After Mad Max, you would never again see a Post-Apocalyptic Roadtrip Movie without a ridiculously dressed gang of thugs riding low cc engine motorcycles. The tropes of the post-nuclear wasteland and the lone characters wandering through it existed before Mad Max, in stories such as A Canticle for Leibowitz, On the Beach, and A Boy and His Dog. Mad Max distilled those tropes into a heady elixir of violence and weirdness, fired by the last brutal decade of the Cold War. It provided a template for all the films that came after. And there have been hundreds.

Two Mad Max sequels, Cherry 2000, Solarbabies, Tank Girl (Furiosa was not the first metal grrrrl in one of these movies), Hardware, Slipstream (starring Mark Hamill in his first-ever villain role), and any number of low-budget, C-grade marvels—Hell Comes to Frogtown, anyone? Dr. Pepper even did a series of commercials in which a roguish hero makes his way through a land that has been destroyed by the Cola Wars, preaching the gospel of an original soft drink experience (these are on YouTube and totally worth a look). One of my favorite movies of the genre is Radioactive Dreams, in which two young men who’ve spent most of their lives in a bomb shelter reading nothing but 1940s hardboiled detective novels don fedoras and set off across the wasteland to find their fortunes, inadvertently taking possession of the launch key for the last nuclear missile in existence along the way. The gangs that oppose them are based on different decades of music. They face down the ’50s greasers, the ’60s mods, the ’80s punks, and so on. The movie ends with Philip and Marlowe (I know, right?!) teaching everyone swing. This movie is a perplexing and heartfelt mash of pure WTF win.

While the Post-Apocalyptic Roadtrip Movie reached its apex in the 1980s, the form is still being practiced. Noteworthy recent examples include the delightfully gonzo Six-String Samurai from 1998, and 2009’s The Road, based on the Cormac McCarthy novel.

Some of what you’ll see in a typical Post-Apocalyptic Roadtrip Movie: A ragtag group of misfits who probably do not get along journey across a desolate, desert landscape. Hideous villains. Cannibals. Ominous mutated people and monsters. An obsession with clean water. Armor that often looks more like bondage gear. Weird hair. Creative uses of detritus from the Before Time. Stories of some utopian place that The War didn’t touch. Dust. So . . . much . . . dust. And an incongruously endless supply of gasoline.

In some respects, there’s nothing in Mad Max: Fury Road that you can’t find in any other film of this genre. However, it puts these pieces together so very, very well, and it proves that what should feel terribly dated is somehow still relevant.

What does the Post-Apocalyptic Roadtrip Movie actually mean? Why were the ’80s filled with them, and why do they persist? At first glance they serve as a cautionary tale, showing us the nuclear-blasted world in which the living will envy the dead that those of us of a certain generation grew up hearing about. Hollywood’s understanding of the concept of radioactive mutation serves up an unlimited source of the monstrous, of the abject, of villainy. The flipside of that is an obsession with purity. The subtext of this trope can be deeply problematic, an othering of any being who is in any way different, and a fetishization of these beautiful women with perfect skin who always seem to show up in these things. That subtext is very much an expression of Cold War id: After the bomb, will we even be human anymore?

Then again, maybe these stories are a parable for the degeneration of humanity when there isn’t a civilization to prop it up. Authoritarian barbarism will reign supreme. And is there any better basic narrative storyline than the rugged hero who emerges from the wasteland to overturn that authoritarian barbarism? It’s nigh Tolkeinian. It practically writes itself.

The Post-apocalyptic Roadtrip Movie may not be science fiction at all. It may be a form of epic fantasy that mines the Cold War’s peculiar fears and obsessions. These stories are not required to answer questions like: How is this economic-political system even sustainable? Where are they getting their fuel and parts? Or laundry detergent for those white muslin bikinis? Much like cyberpunk and steampunk, which also often don’t make sense, the Post-apocalyptic Roadtrip genre is an aesthetic. It’s about the look, not the logic. The journey exists to show us this strange, gonzo world the nuclear apocalypse has created. And to give a backdrop for the heroic.

Which brings us to Mad Max: Fury Road, with its Doof Warrior and his flame throwing guitar (a friend of mine observed that it’s a really good thing he didn’t see this when he was fifteen, or he would be in his garage attempting to make a flame-throwing guitar right this minute), its Pole Cats, its Frankensteined cars decorated in doll heads, its room full of voluptuous mothers being milked, and so on. If Fury Road lit up our hindbrains, it’s because it understands and embraces the aesthetic its predecessors helped define.

What may be most surprising is how often these movies have happy endings—often ambiguously happy, but nevertheless a core tenet is the survival of hope. The stranger comes to town and really does defeat the horrible authoritarian baddie. A better world is possible if our heroes learn to work together, if everyone gets access to all that clean water. The last three Mad Max movies have all featured idealistic young woman spurring everyone around them on to a better world. And Max gets caught up in that quest every time. He can’t help himself. So yes, the movie may be about Furiosa, but Max is the main character deciding once again that yes, he must survive, and there are still causes worth fighting for.

Carrie Vaughn’s work includes the Philip K. Dick Award winning novel Bannerless, the New York Times bestselling Kitty Norville urban fantasy series, over twenty novels and upwards of 100 short stories, two of which have been finalists for the Hugo Award. Her most recent novel, Questland, is about a high-tech LARP that goes horribly wrong and the literature professor who has to save the day. She’s a contributor to the Wild Cards series of shared world superhero books edited by George R. R. Martin and a graduate of the Odyssey Fantasy Writing Workshop. An Air Force brat, she survived her nomadic childhood and managed to put down roots in Boulder, Colorado. Visit her at www.carrievaughn.com.