It was wonderful to be invited to take part in Lightspeed’s irreverent “Destroy” project. This is important work. It was a delight to collaborate with Kristine Ong Muslim in choosing the longer fiction. Whether we agreed or disagreed about a story, we were able to talk it through to a decision both amicably and honestly. When I flagged on reading all the submissions that made it through the slush pile, she rallied (and, I hope, vice versa). It felt like a true working partnership, and I can’t thank her enough. I loved being secure in the knowledge that the other aspects of the issue (slush, flash fiction, essays, non-fiction, reprints, art, general detail wrangling) were in capable hands. I loved seeing so many submissions (342!) from so many different parts of the world. The illustrations created by the talented artists who read the stories and interpreted them visually makes this special issue gorgeous in another medium. The next time some ignorant soul tries to tell you that people of colour don’t read, watch, or write science fiction, here’s yet one more forward-thinking venue to which you can point. The next time someone tells you that putting together a collection of SF/F by people of colour will disadvantage the quality of the writing in that collection, let them know that there’s no problem finding strong, thoughtful, engaging SF/F and discussion of the genre by people of colour. For the editors of POC Destroy SF, the real dilemma was narrowing our choices down to the few we could fit in the volume. And that’s only writing in English! To every writer of colour who submitted work to us, whether or not your piece saw print, you are proving that we belong in this genre. I don’t think our presence breaks science fiction at all; I think it expands it.

It was an honor to work with Nalo Hopkinson in choosing the stories to be included in yet another installment to the hugely successful Destroy series of Lightspeed Magazine. Submissions were sent in by writers from many parts of the world. This resulted in a final lineup that sported unique voices and diverse perspectives. There is also a good mix of emerging and established POC creatives in this special issue. This volume, which makes for a fine addition to your bookshelf whether it is of the digital variety or otherwise, says a lot about how the making of literature is and should be a collective undertaking. Ideally, it is a long narrative that takes in every shtick and swagger. I think of science fiction as a viewing surface onto which writers project their anxieties and hopes for the future. These anxieties, these hopes are usually told in the language of the present—our time, a point that is now more expansive and nuanced compared to the very-white-and-very-male, white-male-saves-the-world science fiction that served as well-loved comfort food of my youth. People of Colo(u)r Destroy Science Fiction! represents a progressive step in the history of the genre. The fact that it is also fun—thought-provoking fun—to read is just a bonus.

Time is different for us People of Colo(u)r. If you’re of an age and ethnicity with me, you grew up hearing how so-and-so was operating on “CPT,” or “Colored People’s Time.” The adjustment called for, as I understood it, was about thirty minutes. So if you wanted Aunt Lurena to show up at the picnic at noon you told her it started at 11:30.

I learned as an adult that the concept of a slightly-out-of-sync chronology could be applied to other groups and situations, too. There was “Island Time,” “Counterculture Time,” and so forth.

However, there are other ways, besides this delay, in which time’s flow varies for POC: It vanishes underground. It reverses. It curves around itself, joining future and past at invisible seams.

Not ours exclusively, this nonstandard temporality, but ours peculiarly.

My selections reflect that connection. Though the events of “The Evening and the Morning and the Night” are told in chronological order, their narrator attempts suicide when she’s forced to look into “a kind of temporal mirror.” “Double Time” and “Delhi” deal quite explicitly with time travel, and “1965” evokes a hopeful past tinging the heroine’s interpretation of an ambiguous present and future. The ending of “Empire Star” winds itself back into its own beginning.

Five reprints. I could have picked fifty: People of Colo(u)r have been destroying science fiction for centuries. At any given point in centuries to come they will have been doing so. The destruction continues here and now.

A few years ago I collected and edited an anthology of Indigenous SF entitled Walking the Clouds (University of Arizona Press, 2012). I’d long been developing the term “Indigenous Futurisms” to discuss an ironic anachronism in literary influence: Many experimental narrative techniques that cutting-edge SF authors congratulate themselves for discovering have actually been around for millennia in Indigenous storytelling. Slipstreams, alternative realities, multiverses, time traveling—the stock tropes of mainstream SF are ancient elements of Indigenous ways of knowing. In Walking the Clouds, I asked emerging Indigenous POC writers to destroy science fiction by using Indigenous epistemologies to reimagine it.

I am delighted to invite Lightspeed readers to visit us in across the internet at The Imagining Indigenous Futurisms Facebook page, a growing discussion forum where more than 1000 members will get you up to speed on all things IF. And if you are one of those emerging writers that I imagined reaching out to when I first sat down to write Walking the Clouds, I want you to know about our Imagining Indigenous Futurisms SF Contest, an annual award now in its 7th year. The deadline for submitting your IF SF story: November 1.

Enjoy the nonfiction, and remember to Imagine Indigenous Futurisms. . .

I have no mouth, and I must scream, proclaims the title of Harlan Ellison’s classic work of science fiction. Like most “classic” works of science fiction, it was written by a white man. For centuries, white voices have been boosted, have been heard more than those of POC (a muddled term, to be sure, but one that facilitates a necessary discussion). It’s been their mouths doing the screaming.

As Personal Essays Editor, I sought to boost a variety of non-white voices. Some established, some still finding their place in the SFF community. Some from the United States, some from around the world. Some with parents of the same race, some biracial. These science fiction fans told stories of their relationship to science fiction—reading, writing, watching, experiencing. And it startled me that even though I had chosen people from so many different backgrounds, they had so many similar feelings. Much of which I felt myself. I read these essays and they brought me to tears. And also to cheers. I arranged these brilliant pieces by POC such that they spoke to each other, sometimes agreeing, sometimes disagreeing; there was no One True POC Experience of Science Fiction but all of these reactions began to paint a picture of what it’s like for us. They were our fury. They were our patience.

They were our conversation.

I deliberately started with Alyssa Wong’s incendiary “Buzzword” because it captures the don’t-tell-me-what-I-can’t-do spirit that birthed the Destroy series, but I ended with Caroline M. Yoachim’s lovely “Penguins, Robins, and Science Fiction” because it captures the hopeful optimism I wish for the future of the genre. We have mouths, and oh yes, we will scream.

But we will also sing.

The People of Colo(u)r Destroy Science Fiction! special issue was guest-edited by the following: 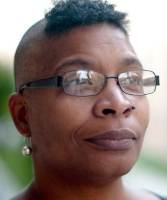 Nalo Hopkinson is a Jamaican-born Canadian whose taproots extend to Trinidad and Guyana. She has published numerous novels and short stories, and has edited and co-edited anthologies, including Whispers From the Cotton Tree Root: Caribbean Fabulist Fiction, and Mojo: Conjure Stories. Her writing has received the John W. Campbell Memorial Award, the Locus Award, the World Fantasy Award, the Sunburst Award for Excellence in Canadian Literature of the Fantastic, and the Andre Norton Award. Hopkinson is a professor of Creative Writing at the University of California, Riverside. She has taught at both the Clarion Writers’ Workshop and the Clarion West Writers’ Workshop. Hopkinson’s short story collection Falling in Love With Hominids was published in 2015 by Tachyon Books. Learn more at nalohopkinson.com. 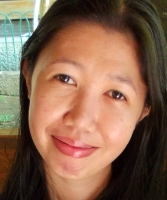 Kristine Ong Muslim is the author of We Bury the Landscape (Queen’s Ferry Press, 2012), Grim Series (Popcorn Press, 2012), and A Roomful of Machines (ELJ Publications, 2015). Her forthcoming books include the short story collection Age of Blight (Unnamed Press, 2016) and two poetry collections from university presses in the Philippines. Her stories appeared in One Buck Horror, Confrontation Magazine, The State, and elsewhere. She lives in southern Philippines and serves as poetry editor of LONTAR: The Journal of Southeast Asian Speculative Fiction, a literary journal published by Epigram Books in Singapore. Learn more at kristinemuslim.weebly.com. 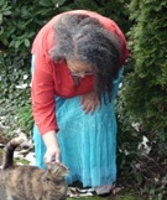 Nisi Shawl is a founder of the Carl Brandon Society and a member of Clarion West’s Board of Directors. Since its 2011 inception she has edited reviews for feminist literary quarterly The Cascadia Subduction Zone. Books Shawl has edited include Bloodchildren: Stories by the Octavia E. Butler Scholars; and WisCon Chronicles 5: Writing and Racial Identity; she also co-edited Strange Matings: Science Fiction, Feminism, African American Voices, and Octavia E. Butler; and Stories for Chip: A Tribute to Samuel R. Delany. With Cynthia Ward she coauthored 2005 Tiptree Longlist book Writing the Other: A Practical Approach. Her story collection Filter House co-won the 2009 Tiptree Award. Shawl’s Belgian Congo steampunk novel Everfair is due out from Tor in August 2016. 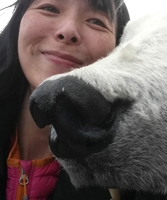 Berit Ellingsen’s novel Not Dark Yet will be published by Two Dollar Radio in November 2015. Berit is the author of the short story collection Beneath the Liquid Skin (firthFORTH Books) and the novel Une Ville Vide (PublieMonde), with work in W.W. Norton’s Flash Fiction International, SmokeLong Quarterly, Unstuck, The Humanity of Monsters, and other places. Berit’s stories have been nominated for the Pushcart Prize, Best of the Net, and the British Science Fiction Association Award. The author divides time between Norway and Svalbard in the Arctic, and is a member of the Norwegian Authors’ Union. Learn more at beritellingsen.com.

Grace L. Dillon (Anishinaabe) is a Professor in the Indigenous Nations Studies Program, School of Gender, Race, and Nations, at Portland State University in Portland, Oregon, where she teaches graduate and undergraduate courses on a range of interests including Native American and Indigenous studies, science fiction, Indigenous cinema, popular culture, race and social justice, and early modern literature. She is the editor of Walking the Clouds: An Anthology of Indigenous Science Fiction (University of Arizona Press, 2012) and Hive of Dreams: Contemporary Science Fiction from the Pacific Northwest (Oregon State University Press, 2003). Her work appears in diverse journals including The Journal of Science Fiction Film and Television; Foundation: The International Review of Science Fiction; Extrapolation; The Journal of the Fantastic in the Arts; The Historical Journal of Film, Radio and Television; Science Fiction Studies; Parabola; and Renaissance Papers. 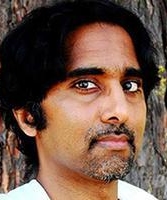 Sunil Patel is a Bay Area fiction writer and playwright who has written about everything from ghostly cows to talking beer. His plays have been performed at San Francisco Theater Pub and San Francisco Olympians Festival, and his fiction has appeared or is forthcoming in Fireside Magazine, Orson Scott Card’s Intergalactic Medicine Show, Flash Fiction Online, The Book Smugglers, Fantastic Stories of the Imagination, and Asimov’s Science Fiction. Plus he is Assistant Editor of Mothership Zeta. His favorite things to consume include nachos, milkshakes, and narrative. Find out more at ghostwritingcow.com, where you can watch his plays, or follow him @ghostwritingcow. His Twitter has been described as “engaging,” “exclamatory,” and “crispy, crunchy, peanut buttery.” 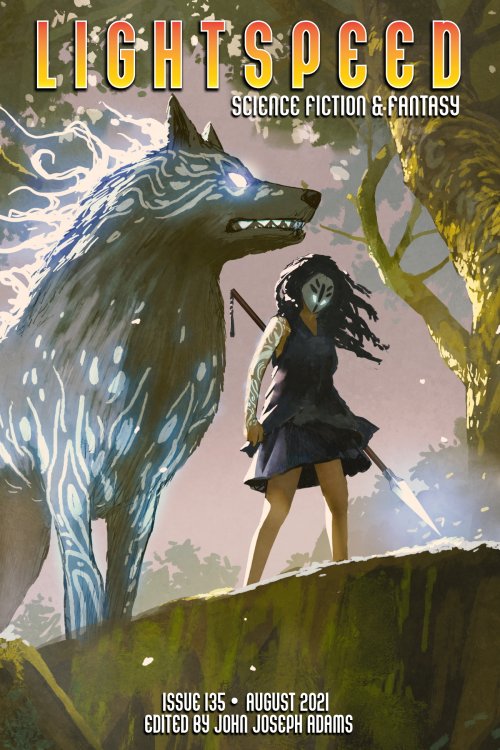