As part of our People of Colo(u)r Destroy Science Fiction! special issue, we opened up Lightspeed to flash fiction for just the third time. The flash fiction section was guest-edited by critically acclaimed writer Berit Ellingsen. Half of the flash selections are available online, while the other half are exclusive to the print/ebook edition. Use the table of contents below to navigate through the flash section. 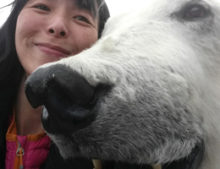 Berit Ellingsen’s novel Not Dark Yet was published by Two Dollar Radio in November 2015. Berit is the author of the short story collection Beneath the Liquid Skin (firthFORTH Books) and the novel Une Ville Vide (PublieMonde), with work in W.W. Norton’s Flash Fiction International, SmokeLong Quarterly, Unstuck, The Humanity of Monsters, and other places. Berit’s stories have been nominated for the Pushcart Prize, Best of the Net, and the British Science Fiction Association Award. The author divides time between Norway and Svalbard in the Arctic, and is a member of the Norwegian Authors’ Union. Learn more at beritellingsen.com.