In 2017, Martha Wells wrote about an anti-social android who killed a group of scientists against its will. All Systems Red won the Nebula award for best novella. Now she continues Murderbot’s quest for the truth in two new novellas, Artificial Condition and Rogue Protocol. Two novella reviews for the price of one! 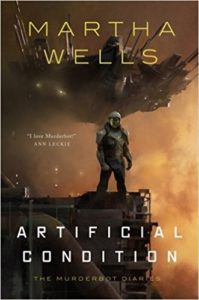 Meet Murderbot, a SEC(urity) unit who hacked itself to become self-governing. All it really wants is to be left alone so it can consume its media in peace. Now it has gone rogue, tracing its steps back to a mining facility to fill the missing bits of its memory of the attack. In doing so, it uncovers a much larger conspiracy that may have it going up against GrayCris, the corporation that had manufactured Murderbot.

Both stories center on Murderbot’s interactions with other bots and AIs. Artificial Condition has Murderbot teaming with an Artificial Research Transport, (Murderbot nicknames it “ART” with the “A” having a cruder meaning) to sneak into the mining facility. In Rogue Protocol, Murderbot is aided by Miki, an inquisitive, naive robot who is part of an investigation crew at a terraforming facility. The humans in both stories are diverse in gender and sexuality, but are mainly used as cover for Murderbot to do its investigation without drawing attention.

Wells’ prose is tight and engaging—from Murderbot’s wry parenthetical asides interrupting its own narrative, to the fast-paced action that makes you want to view it in a movie. Both novellas catch you up to speed on events in the first book without being overly heavy-handed. There is certainly a larger narrative teased out in bits and pieces in each novel—What is GrayCris attempting to cover up? Why is Murderbot the way it is?—but the books themselves are stand-alone, almost episodic. 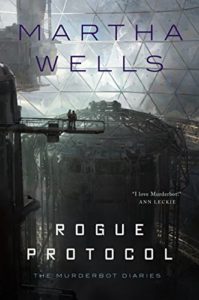 Murderbot is fascinating. It can make itself appear human and has organic parts, but doesn’t see itself as human and, furthermore, doesn’t want to. Yet, it loves human-made media. It consumes shows and music every chance it gets, even trades it for passage aboard the ART, where the two bond (sort of) over shows like Worldhoppers and Sanctuary Moon. Why would an AI care about human entertainment?

Perhaps because as much as Murderbot is apathetic about humans, it can’t help but assist them when they’re in need. Or perhaps because it has to deal with its own emotions. Upon watching Miki being treated as part of its crew, Murderbot is surprised to feel jealousy, as its time as a SEC unit meant being ignored at best, or being portrayed as an unstable killer at worst.

Or maybe it just views media as a way to process life and the human condition in general, which is why it ultimately helps humans. After all, Murderbot muses: If the humans were dead, who would make the media? 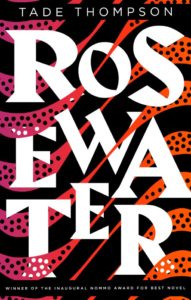 Kaaro is a Nigerian government agent who is also a sensitive, a person possessing psychic abilities. He is able to access people’s thoughts and emotions through the use of the xenosphere, a psychic space that originates from a mysterious dome which sits in the center of Rosewater, the city that rose up around the dome. Once a year, the dome emits a power that causes everyone near it to be fully healed. There are some creepy oddities, such as dead bodies being imbued with life long after the soul is gone, but the inhabitants see the dome as a beneficial thing.

Kaaro sees it differently. The sensitives around him are dying, and the government sends Kaaro to investigate. In the xenosphere, his mental avatar is a ferocious griffin. In real life, he is cowardly, reluctant to use a gun, preferring to flee rather than fight. He has no friends and views the dome, his powers, and his job with apathy and diffidence, although he enjoys antagonizing his boss, Mrs. Femi Alaagomeji. That all changes, however, when he meets Aminat, a woman with her own secrets. Through Aminat and Molara, a blue butterfly entity in the xenosphere, Kaaro learns of a larger, more sinister plan being set in motion, and he isn’t sure that he alone can stop it.

The book jumps around to different points in Kaaro’s life: from his youth where he was almost burned by a mob for being a skittish thief, to his recruitment into Section 45 to search for someone called The Bicycle Girl. Sometimes the switching between timelines is disorientating, but Thompson still manages to keep me engaged and wondering what would happen next. His writing is visceral and humorous at times. The scenes with Kaaro’s dismal attempts to flirt with Femi made me laugh despite myself. Other times, his writing details horrors with a clinical detachment that gives insight into why Kaaro strives to keep himself distant, and why Aminat threatens that.

The worldbuilding is gorgeous and brings to mind Jeff Vandermeer’s Southern Reach Trilogy. The dome is alien and biological, its presence seen as an invasion through spores rather than little green men with rayguns. (Kaaro controls the xenosphere’s influence on him through the use of an antifungal cream.) Thompson spins this into a brilliant commentary about colonization. “We’ve seen colonisers before,” Kaaro muses, “and they are similar, whether intercontinental or interplanetary.”

Like the Murderbot series mentioned above, Thompson’s Rosewater is an exploration of what it means to be human. It doesn’t provide full answers—which is great because Rosewater is just book one of the Wormwood Trilogy. It will be interesting to see where Thompson goes with Kaaro and Aminat, and the human race as a whole. 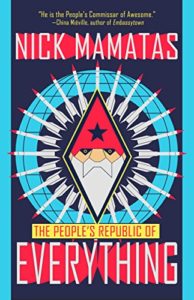 Nick Mamatas is a sharp, sarcastic, amazing writer whose fiction runs the gamut from horror to speculative to literary. The People’s Republic of Everything gathers his short fiction from the past decade and puts it in one book. It’s a great collection, and if you’re a writer, I highly suggest reading it, not just for the stories, but also for the story notes, where Mamatas gives insights into the history, inspiration, and challenges he had getting the stories published.

Mamatas’s stories tend to dwell on social commentary, spanning topics from communism to social justice to memes. His opening story, “Walking With a Ghost,” briefly explores Lovecraft being brought back to life as an AI and dealing with the horror of his own existence. A similar scenario is set in “Arbeitskraft,” which has Max Engels attempting to recreate Karl Marx through a punch cloth loom, but also attempting to liberate matchstick girls with mechanical jaws and revolutionizing the world through steam. The short novel that ends the collection, “Under My Roof,” is a fun romp of a twelve-year-old psychic boy narrating the story of his father declaring independence from the US and building his own nuclear bomb. My most favorite story in the collection is “A Howling Dog”—a wonderful satire set in the social network hot mess that is known as Next Door. As Mamatas notes, this piece can be listened to for free at Psuedopod, complete with multiple narrators. (Note to self—download that episode.)

Mamatas’s wit is wry and at times self-deprecating. In the story notes for “Slice of Life,” he mentions how in 2013, he announced his retirement from genre writing to focus on realist fiction, only for his wife to reveal she was pregnant a month later. “Babies cost money,” Mamatas writes. “Crime doesn’t pay. Neither does literature.” A couple of stories draw from his Greek heritage, from “The Phylactery,” a rumination about genes spreading across generations, to “North Shore Friday,” a story based on his grandmother and told with random thoughts set apart in boxes inside the text.

The strongest stories, however, are his horror stories. I’ve mentioned “A Howling Dog” already, which ends with a “wait . . . what?” moment that had me rereading the story again. “Lab Rat,” told only in dialogue, is creepy, particularly once you learn that it’s based on actual experiences. The most disturbing piece is “The Glottal Stop,” about a formerly doxxed woman on a date that goes horribly awry. It’s a story about resistance and fighting back, but also the insidious power of memes and virality. It’s the only original story in the collection, and the only one that made me close the book and not pick it up for three days—it was that dark and chilling.

Then I picked it up anyway and reread “A Howling Dog,” because Mamatas’s name for the Next Door clone in the story is “Cranki.ly” and man, that is so hilarious and apropos.