The Answer That You Are Seeking

It’s the lollipops that break you. The thought of your child sucking on one during a lockdown drill carries enough cognitive dissonance that your brain has trouble actually comprehending it. You know the purpose—the methodology behind it all—lollipops in their mouths will keep preschoolers quiet, and surely the sugar can’t hurt. But the fact that your preschooler needs to know how to behave in case there’s an active shooter is so disturbing that you wish there was a way to retreat into your shell, like a defiant hermit crab. 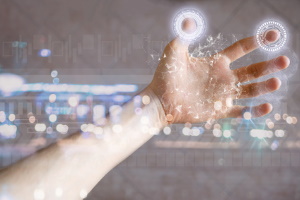 Tasha’s avatar smiled from the screen, a little too perfect to be true. That was a choice, just like everything else about it: When we’d installed my sister’s new home system, we had instructed it to generate avatars that looked like they had escaped the uncanny valley by the skins of their teeth. It was creepy, but the alternative was even creepier. Tasha didn’t talk. Her avatar did. Having them match each other perfectly would have been . . . wrong. “So I’ll see you next week?” she asked. 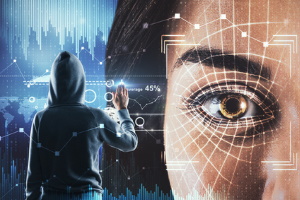 Hello, Sacrid Henn. I’m aware that you’re terrified. I’m also aware that you are paralyzed, deaf, and blind, your only sensory input being my voice. It is a voice that has been designed to be as comforting as these circumstances permit. Believe me when I say that you are in no danger and that my intentions toward you are that of a caretaker toward a vulnerable charge. Understand: Your insensate condition is the result of a neural block, administered to prevent you from injuring yourself in panic upon awakening. 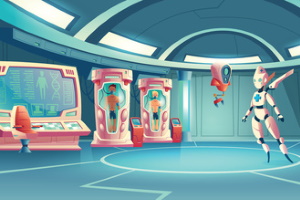 They almost catch you in orbit. They almost slaughter you like the others. The airwaves are full of screams. Friends are dying. Loved ones are being lobotomized, turned into slaves. You hunker in the tiny spacecraft, your improvised last ditch escape, the lifeboat for you and the precious cargo you carry. The hull is as cold as you can make it, the systems running at the minimum possible to keep you alive and your children in stasis. You drift in orbit and play dead, hoping they’ll miss you. 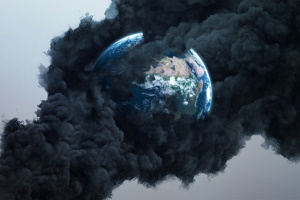 My asiMom was okay. She was like a pillow, a walking talking pillow. But she gave good hugs and smelled right. They did a good job with her: Sometimes when she hugged me and I closed my eyes it felt like it’s supposed to feel and I forgot that she’s not my real mom. I saw her in the shower a few times. She didn’t care. She took showers every day exactly at 5:45 p.m., even if I messed up every clock in the house, because her inside clock was always right. She didn’t even need to shower because she was just a robot, but she did anyway. My dad said that that made her more realistic. 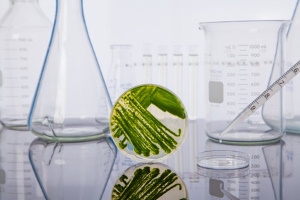 First, I want to give you this moment. You will understand why in the end. We were walking on the trail, the way we did on Sundays: the sun-washed gully, the open air, the shadows of last night’s rain staining the earth dark and slick beneath our boots. At the river’s edge, I caught my husband’s hand and pointed at a stack of topaz-eyed turtles that had piled themselves ancient and precarious as a cairn. Here are the shapes and shades that colored my life, before. Then we looked up and saw you. 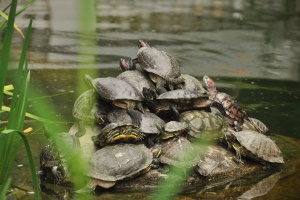 My son’s eyes were broken. Emptied out. Frozen over. None of the joy or gladness was there. None of the tears. Normally I’d return from a job and his face would split down the middle with happiness, seeing me for the first time in three months. Now it stayed flat as ice. His eyes leapt away the instant they met mine. His shoulders were broader and his arms more sturdy, and lone hairs now stood on his upper lip, but his eyes were all I saw. “Thede,” I said, grabbing him. He let himself be hugged. His arms hung limply at his sides. My lungs could not fill. 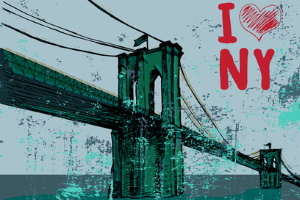 One Thousand Beetles in a Jumpsuit

Isla didn’t consider herself much of an outdoor person, but after five layoffs and a breakup, she found herself in a drone warehouse at the border of the barren wasteland known as Robot Country. She consulted the map on her tablet. To the west was the Gila National Forest. So, trees. She clicked on the forest icon and up popped some names of trees. Arizona sycamore, Douglas fir, Aspen. To the south was desert and the Mexican border. To the east was an even more extreme kind of desert, the White Sands National Monument, where atomic bombs had been tested in the previous century. 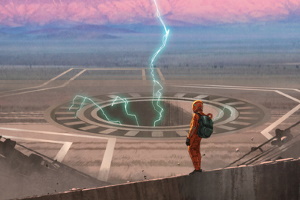 The Moon Is Not a Battlefield

We’re recording. I was born in the sky, for war. This is what we were told. I think when people hear this, they think of ancient Earth stories. Of angels and superheroes and gods, leaving destruction between the stars. But I’m no superhero, no Kalel of America-Bygone with the flag of his dead planet flying behind him. I’m no angel Gabreel striking down Satan in the void or blowing the trumpet to end worlds. I’m no devi Durga bristling with arms and weapons, chasing down demons through the cosmos and vanquishing them. 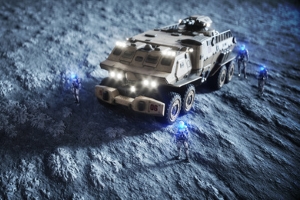 Noah Stubbs eyes the large white pill pinched between his thumb and forefinger, remembering the first time he hit golf balls on the moon with Gord. “I wonder,” Gord says to him as Noah lines up on the tee, “just how far these suckers’ll really go?” THWACK! Noah swings. The little ball hurtles into the Lunar day, a pinprick of speeding light bright against the velvet sky. Long after the ball becomes invisible to the naked eye, his suit’s visor tracks its trajectory until it drops towards the ground. They parked the hopper at the top of the Virgo Escarpment. 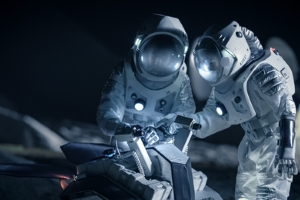