Therefore What the Multiverse Has Joined Together, Let No One Separate

You’ve seen the original picture. If you’re anything like me, you know it by heart. The image that came out of the first (and at the time of this writing, only) discovered white hole was a flower. It was gray and pixelated, but it was beautiful.

When it was finished, I was invited to the vault to view the flower. Not because I was anyone important. I mean, I had millions of followers on social media, my content regularly went viral, and I had written a dozen best-selling books. But to the scientific community, I was a personality. An influencer. Not serious. Not like Yxa.

I’m not like Yxa, it’s true. And neither are you, I’m guessing. But perhaps talent like hers skips a generation. Are you good at math? I’m terrible at it. And even if I’d had the talent, I think I would have gone into astronomy and not computing.

I would have studied the one known white hole and looked for others like it. It’s a black hole, but reversed. Nothing can enter it, but stuff spews out of it: light, interstellar dust, even entire stars. And ultra-long sheets of crystalline carbon.

Ribbons was how Yxa described them in her notebooks. From the very beginning, she thought of the message as a gift. The ciphertext was encoded as qubits, found by analyzing anomalies of the spectra of the crystallized carbon. I’m sorry if I’ve gotten any aspect of this explanation wrong, I don’t really understand it myself.

Yxa wrote the algorithm that converted the qubits to pixels, but because the interception of the ciphertext was so slow, she died without seeing the picture completed. She got only the lower third: the bottoms of narrow clusters of petals, the serrated leaves and skinny stems.

Symphyotrichum firmum, she wrote, glossy-leaf aster. Purple. She was just guessing. It’s my favorite color too. In her day, some were opposed to decryption. They thought the encoded information might be weaponized somehow. Malware that would attack the optic nerves of those who looked upon the pixels or something, I don’t know. Again, it’s hard to explain something you don’t understand. And so, some people hated her. And hated me. And will hate you. Carry on.

Yxa never got to see the full picture. She never got access to the second message that was found later, layered under the first. It was a genome. DNA. Had the ciphertext come from a second Earth? A future Earth? Or was DNA the optimal storage message for genetic information and thus used by lifeforms across the galaxy? No return address had been detected. A lack of information is also information.

I testified at the UN in favor of bringing the flower to life: “This might be our only chance to make first contact within our lifetimes.” I’m not saying I made the difference, but the vote was very close. Some people, the same ones that opposed Yxa at every step, thought the organism might be a hostile entity. They protested the plan to bring the genome to life.

As a compromise, work on the flower was done in a highly secure location. The easiest way forward was to begin with the genome of the most similar Earth organism and then cut and replace. This turned out to be S. Puniceum, not S. Firmum. Yxa was a genius, but botany was outside of her field of expertise. It was purple, she was right about that. As early versions of the flower failed to germinate, the scientists used more and more of the S. Puniceum genome. Once it finally took root, critics said it was more like a genetically modified Earth organism than an extraterrestrial.

I disagreed, as you can imagine. Take us, for example: Just because our genomes had been altered to remove diseases and repair damage didn’t mean we weren’t Yxa’s clones. No replica is exact. That’s life. No other lifeforms have been detected anywhere. Not on Mars or Europa, not by our telescopes and satellites. Perhaps this is no longer true? And if so, lucky you. The universe is too lonely. Yxa thought the message from the white hole was meant to cheer us up.

The flower was kept under glass. I was warned before viewing that selfies were not allowed. I wasn’t prepared for how beautiful I would find it. You’ve seen pictures, but pictures don’t do it justice.

It made me sad to see it. Be prepared to miss me even though you’ve never met me. I missed Yxa, even though her death is the only thing that enabled my existence. As of this writing, you’re only allowed one clone at a time. Even the Pope, even Jeff Bezos. Perhaps this will have changed by the time you enter the picture? If so, lucky you.

The Universe is finite, but the Multiverse is not. There is some universe in which she and I viewed the flower under glass together. Where we held hands and wiped tears from our faces as we crept as close as we could, feeling both more alone and less alone than we’ve ever felt. Feeling like specks of dust on dust but also feeling like we mattered. Our thoughts, our feelings, our contributions, they mattered. This flower was for us.

I hope more messages are found. I hope you will have an entire alien botanical garden to visit. I hope you think of me when you do. I know you will. But think of her also. None of it would have been possible without her. I’m so happy you exist, even though I’ll never get to meet you. That’s why I’m writing you. No one should have to make first contact alone. This letter is for the moment just before you enter the vault. Know that I am with you in some form, even if that form is only genetic memory.

In the meantime, I’m working with a team that is replicating the qubit crystal technology that came from the white hole. I have no technical expertise to add, unfortunately, but they want help with the message. We want to send something through a black hole with the hope that it will come through a white hole elsewhere, either in this universe or another. It’s unlikely we’ll know where it lands. Those that receive it might mean us harm, so best to keep it anonymous. There’s much debate about what we should say, but Yxa had a definite opinion on this: 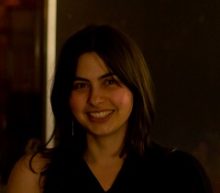 Dominica Phetteplace writes fiction and poetry. Her work has appeared in Zyzzyva, Asimov’s, Analog, F&SF, Clarkesworld, Uncanny, Copper Nickel, Ecotone, Wigleaf, The Year’s Best Science Fiction and Fantasy and Best Microfiction 2019. Her honors include a Pushcart Prize, a Rona Jaffe Award, a Barbara Deming Award and fellowships from I-Park, Marble House Project and the MacDowell Colony. She is a graduate of UC Berkeley and the Clarion West Writers Workshop.