Nonfiction: “The Future’s So Bright I Gotta Wear Shades,” by Genevieve Valentine, “Neurotransmitters: God’s Way of Getting You High” by Christopher Sedia, “Feature Interview: The Redemption of Paolo Bacigalupi” by Christie Yant, and “Five Animals That Will Take Over the World After We Eradicate Ourselves” by Jeremiah Tolbert. 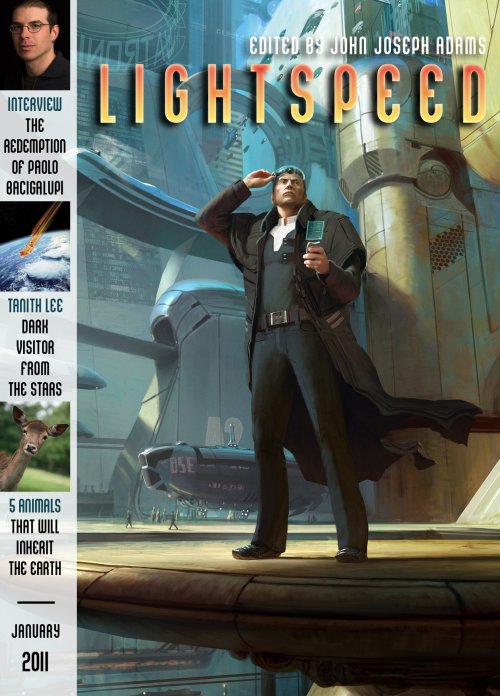 Welcome to issue eight of Lightspeed! On tap this month… Fiction: “Postings from an Amorous Tomorrow,” by Corey Mariani, “Cucumber Gravy” by Susan Palwick, “Black Fire” by Tanith Lee, “The Elephants of Poznan” by Orson Scott Card. Nonfiction: “The Future’s So Bright I Gotta Wear Shades,” by Genevieve Valentine, “Neurotransmitters: God’s Way of Getting You High” by Christopher Sedia, “Feature Interview: The Redemption of Paolo Bacigalupi” by Christie Yant, and “Five Animals That Will Take Over the World After We Eradicate Ourselves” by Jeremiah Tolbert.

Digital painting gives me possibilities and freedom that I wouldn’t have in traditional media. It’s easy to experiment and trying different things without destroying whole work which is extremely important for self-taught individual.

Postings from an Amorous Tomorrow

The reason I am not depressed when I look around and see only selfish behavior. I don’t want to hurt you or anyone else because it would hurt me to do so. I think it’s better than altruism.

The Future’s So Bright I Gotta Wear Shades: Guessing the Aesthetics of Tomorrow’s Social Media

Social networking has become one of the most widespread phenomena of the last decade. It’s already revolutionized advertising, customer service, and the news. It’s not going anywhere.

Being legal would be nothing but a pain in the ass, even if I didn’t have to worry about keeping people from finding out about the space cucumbers.

Rural isolation lends itself to clandestine activities; so does Nevada’s laissez-faire brand of rugged individualism. Were I writing the story now, I’d have to explain why Welly’s selling pot instead of meth.

Neurotransmitters: God’s Way of Getting You High

Considering that the human brain comes equipped with the desire as well as all the necessary neurological equipment to get us high, it’s not surprising that ever since humanity began, we’ve been searching out creative ways of doing so.

So while I watch, all this fire-thing just storms into and through the trees and down and it hits the ground, and I think something’s crazy then, because there should be a God-awful great bang, yeah?

Tempted women. An ultimate (forbidden?) knowledge. The scent and taste of an apple. The fear that it may have all happened before, and been Science Fiction back then too.

Interview: The Redemption of Paolo Bacigalupi

With fantasy, you get the luxury of control. Every aspect of the world can be manipulated for your purpose, and the reader is willing to suspend disbelief to a much larger degree than with science fiction.

The Elephants of Poznan

Into this square came the elephants, a group of males, making their way in what seemed a relentless silence, except that a trembling of the windows told us that they were speaking to each other in infrasound.

This is science fiction. As far as we know, it is not only not true, but probably impossible. Most SF ideas fall into this category. It’s simply a cool idea, and who knows?

Let’s face it. We’re doomed. Our species’ greatest scientists have admitted as much—if we don’t find a way off this rock, the human race is facing extinction.