This month, we have original science fiction by Sofia Samatar (“How to Get Back to the Forest”) and Chen Qiufan (“The Mao Ghost,” translated by Ken Liu), along with an SF reprint by Jo Walton (“Turnover”) and Charlie Jane Anders (“Break! Break! Break!”). Plus, we have original fantasy by Kat Howard (“A Different Fate”) and Matthew Hughes (“Phalloon the Illimitable”), and fantasy reprints by Robert Jackson Bennett (“A Drink for Teddy Ford”) and Eileen Gunn & Michael Swanwick (“The Armies of Elfland”). All that, and of course we also have our usual assortment of author and artist spotlights, along with a pair of feature interviews. For our ebook readers, we also have the novella reprint “The Lucky Strike” by Kim Stanley Robinson and novel excerpts from SAND by Hugh Howey and THE MILKMAN by Michael J. Martineck. 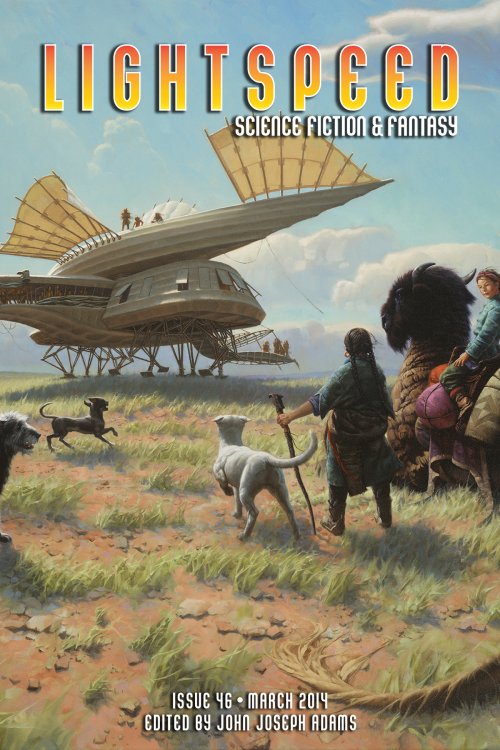 Here’s what we’ve got on tap this month: Original science fiction by Sofia Samatar (“How to Get Back to the Forest”) and Chen Qiufan (“The Mao Ghost,” translated by Ken Liu), along with an SF reprint by Jo Walton (“Turnover”) and Charlie Jane Anders (“Break! Break! Break!”). Plus, we have original fantasy by Kat Howard (“A Different Fate”) and Matthew Hughes (“Phalloon the Illimitable”), and fantasy reprints by Robert Jackson Bennett (“A Drink for Teddy Ford”) and Eileen Gunn & Michael Swanwick (“The Armies of Elfland”). All that, and of course we also have our usual assortment of author and artist spotlights, along with a pair of feature interviews. For our ebook readers, we also have the novella reprint “The Lucky Strike” by Kim Stanley Robinson and novel excerpts from SAND by Hugh Howey and THE MILKMAN by Michael J. Martineck.

Earliest I remember, Daddy threw me off the roof of our split-level house. “Boy’s gotta learn to fall sometime,” he told my mom just before he slung my pants-seat and let go. As I dropped, Dad called out instructions, but they tangled in my ears. I was four or five. My brother caught me one-handed, gave me a spank, and dropped me on the lawn.

This story is an excerpt from a novel that I’ve been working on for a long time. And Rock’s narrative voice sort of evolved over the course of working on the book. I wanted a really energetic, reckless, crazypants persona, so that you could imagine this character being willing to pilot a flaming exercise bike off a tool shed without a second thought.

We are one. We are three. We are sisters, together and individual. Past, present, future. As it was in the beginning, is now, and ever shall be. One of us must have been born first, but the stories say there were always three, and so there were. Fate is too weighty a thing to be dealt by only one.

I don’t believe in predestination—the idea that everything is already written and planned out and that all we are doing is dancing a set of steps that have already been choreographed. I very much believe that we have the individual freedom to fuck up, and to be full of grace. I also believe that humans are story-telling animals—we like things to make sense

How to Get Back to the Forest

“You have to puke it up,” said Cee. “You have to get down there and puke it up. I mean down past where you can feel it, you know?” She gestured earnestly at her chest. She had this old-fashioned cotton nightgown on, lace collar brilliant under the bathroom lights. Above the collar, her skin looked gray. Cee had bones like a bird. She was so beautiful. She was completely beautiful and fucked.

Well, basically, I was looking at the creation of lack, the creation of need. In a consumer society like ours, a sense of lack is extremely important, because need feeds consumption. The more people believe they need, the easier it is to control them. So in the story, I tried to expose that by imagining a society in which children’s parents are taken away and replaced.

A Drink for Teddy Ford

It was often said in certain circles of town that no event could hope to match Jerry Ulkridge’s New Year’s Eve parties. The entire year was spent in anticipation of what the next one might feature. Could he possibly beat the ice sculptures of ’21? The champagne fountain of two years back?

I started thinking about exactly how to write a speculative story set in the 1920s, as that was the theme of this anthology. Naturally, I started thinking about aspects of the era I’ve researched before and just generally liked, and that made me gravitate toward the P.G. Wodehouse stories about Bertie and Jeeves and the other foppish, empty-headed aristos boozing it up and causing havoc.

Mark Zug was born in 1959 in Indiana. He attended the Pennsylvania School of Art and Design. He has worked as a freelance artist doing illustration for works by authors ranging from Edgar Rice Burroughs, Harlan Ellison, and Isaac Asimov to Diana Wynne-Jones and Tanith Lee. He has created cover art and fantasy game book and product art in the Dune, Star Wars, Forgotten Realms, Dragonlance, Battletech, Shadowrun, and Magic: The Gathering universes, among others. His work has been featured in magazines such as Popular Science, Dragon, and Dungeon. He is the illustrator for the best-selling Septimus Heap series of fantasy novels by Angie Sage. His work has won a Jack Gaughan award, a Chesley award, and an Illie award, and is regularly featured in Spectrum: The Best in Contemporary Fantasy Art. He lives in Lewisberry, Pennsylvania.

I still remember that evening: In the heavy air, the plastic dragonflies hovered just below the eaves like miniature helicopters, drifting about slightly even though there was no wind. I came home, and Dad was already in the house but kept the lights off. The setting sun came in through cracks in the window, and his face seemed indescribably thin in the dim, yellow light, like a stranger’s.

There are several layers of deception in the story: The father hides the truth of his illness from the daughter; the state falsifies and tampers with history; and finally, the daughter, taught by everything around her, begins to view the world through a distorted lens, following unspoken rules. This is, of course, like the reality of today’s China.

The Armies of Elfland

by Eileen Gunn and Michael Swanwick

It was the middle of the night when the mirrors came out of the elves. With a sound like the cushioned patter of an ice storm, the tiny mirrors fell to the ground, leaving a crust of glitter behind the marching elf army. They bled, of course, but the elven blood restored the dry land, undoing the effects of the drought, and moss emerged green from the ground in the troops’ wake.

I think what keeps the game of collaboration going (for me, anyway) is that it could change at any moment. At some point, Michael would yell, “Okay! We’re done! Don’t you do another thing! I’ll write the ending!” And then he’d finish it and send it back to me with the warning, “Don’t you change anything!” And I would change something.

Basically, when the story opens up, he gets an interesting contract offer to write a treatment for a movie, and then within a few days he gets a more sinister kind of proposal. There’s a knock on the door, and when he opens it, there’s a long, rectangular box, and inside it is a sniper rifle, exactly the kind he used in the war, with a little note saying, “Would you kill a really bad man for $100,000?”

I was on my way to Teatro del Sale when I saw the crow that hangs around near the entrance to the Newton strut. Birds don’t generally do all that well on Speranza. Jay says it’s because they like light and the whole inside of Speranza is like an Earth city night, with the lights along the struts and the street lighting.

I was on a panel about generation starships and people kept talking about how small they could make them, the minimum number of people you could have and keep genetic diversity and have enough people to work the ship. And I said “But what if they didn’t all want to do their jobs, after the first generation?” and Alison Sinclair said “What if they don’t want to be engineers, what if they want to be ballet dancers?”

The estate of Phalloon the so-called Illimitable was in most respects much like that of the budding thaumaturge Diomedo Obron, Erm Kaslo’s new employer: It had a large, solid house, some remote outbuildings, lawns and a lake, clumps of mature trees, and an all-enclosing wall. What made it different, Kaslo saw as he surveyed it from a hill in the middling distance, was a rocky prominence that stood in the estate’s northeast corner.

It’s a universe I’ve been writing about for twenty years: a far-future, galactic civilization. The thing most of its inhabitants don’t know is that every few thousand years, the universe arbitrarily shifts its fundamental operating principle between rationalism and magic. And one of those changes is just about to happen.

There’s a concept in new media that good content rises to the top, and that’s becoming a little bit less true now that there’s a lot of big money getting involved, and a lot of sponsorship and advertising, and that’s all complicated. But, good content does rise to the top. It’s not just Justin Bieber that goes viral, luckily.