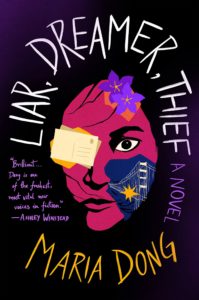 Maria Dong’s debut Liar, Dreamer, Thief is a speculative fantasy about the world a young woman creates alongside the ordinary one, and how she may not be alone in seeing forests and oceans where corporate buildings and highways exist in the real world. Liar, Dreamer, Thief charges furiously along as it follows Katrina Kim as she tries to solve a death and a life while holding on to friends, life, and the fantasy world that has always made things easier to understand.

When Katrina believes she’s found someone who also sees and lives in two worlds, her compulsions lead her to focus on her co-worker in hopes of finding the truth, whatever that may be. And that search for the truth leads her to tragedy and answers she never could have imagined.

Every reader whisked away by a great fantasy story can relate to how Katrina holds Mi-Hee and the Mirror-Man so dear. Books have the power to make sense of things we can’t understand or grasp in our everyday lives. Mi-Hee and the Mirror-Man helped Katrina with so many things when she was younger that it became her whole world. It became her other world. The world she escaped into for security and the world that pulled her in when the real one became unbalanced.

Dong writes out Katrina’s habits, disassociations, compulsions, and slips from the real world into her fantasy world in a way that gives the story an irresistible charge and force. But it also showcases anxiety, depression, and mental health in a realistic way to those who experience it. Even the conversations Katrina has with people throughout the story are strikingly rendered to feel the pain, disregard, and frustration in trying to communicate the world we’re experiencing to those in the world people think we should be living in.

Liar, Dreamer, Thief took hold of me and lifted me away into a world of Dong’s prose and Katrina’s voice. Dong’s book is wonderfully unique and strangely familiar. It’s a fantasy for people who like mysteries and a mystery for people who love fantasy.