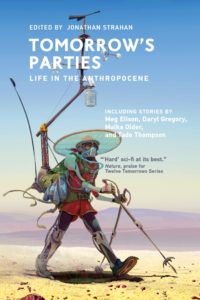 Tomorrow’s Parties: Life in the Anthropocene offers ten original stories, plus an interview with author Kim Stanley Robinson, and art by Sean Bodley. “We are living in the Anthropocene—an era of dramatic and violent climate change featuring warming oceans, melting ice caps, extreme weather events, habitat loss, species extinction, and more. What will life be like in a climate-changed world?” The tales range in vibe and voice, as well as how much they focus on character and narrative versus science fictional concept(s). The Twelve Tomorrows series is known for its high quality science fiction. In this entry, the science fiction ranges from story embellishment to The Whole Point, from lighter, easy fare to deliciously dense and complex. Even the writers’ approaches to the brief range, from pieces which barely make use of the concepts—stories which could, with a few easy strokes, take place, well . . . maybe not now but now-ish—to stories which really embody the anthology’s theme. All this said, every author in here knows how to put together something interesting. I’ll discuss a few of the stories on offer as a sample set.

I first read Meg Elison’s work when her story “Endor House” (bit.ly/3SrcZd1) appeared in Lightspeed. I then grew to really admire her as a writer when I reviewed her collection Big Girl (bit.ly/3UNqYvn). For Tomorrow’s Parties, Elison gives us “Drone Pirates of Silicon Valley.” Danny goes to a baseball game with his dad but ends up inspired by a drone demonstration to get his friends together and hijack “Babazon” drones. Elison’s short fiction is often immediately engaging, with cool concepts and provocative story front loaded. This one is a bit more of a slow burn, but it does glitter with Elison’s wit. See, for example, the fact that the big fancy drone demonstration is the delivery of hot dogs at a baseball game. It’s Americana, it’s satire on capitalism, and it’s a classic Meg Elison smirk. The story starts with the father and son bit, and the father is appropriately archetype-ish, so that Elison can effectively set up what we can see but Danny can’t: that the capitalist world isn’t all that great for everyone. Before we get there, the narrative transitions into a heist story. Once things get going, it gets even better, digging into interesting ideas around the present and future of the labor force, capitalism, and corporate law, with a healthy dose of class commentary. The ending is fantastic and makes the piece very well worth the journey.

Malka Older’s “Legion” begins with an immediate, searing narrative cauterization of male, somewhat chauvinistic entitlement. A man walks into a room and expects all eyes to be on him, only to find that those eyes are glaring in anger. This sets the stage for an up close examination of the interiority of Brayse, a future version of today’s TV talk show personalities. The story quickly becomes a vivid discussion of power and toxic behavior through the kinds of actions that some defend as innocuous. Brayse, however, is typically self-centered, and faced with a guest who has no interest in respectability politics. As his guest discusses a Nobel winning app, the story shifts to examine inequity and safety and different kinds of violence; moreover, the fact that so many problems aren’t even addressed in any meaningful way, aren’t even seen as “real problems.” While this story scorches the edges of the page with its rage, it also highlights both the essential problem(s) and offers a thoughtful solution: community action. Yes, the community action in the piece is tied to a near-future science fictional concept, but at heart, it comes down to the meaning behind the title: Legion—many folks coming together and finding empowerment in mutual support. Brayse is a stand-in for, well, just . . . too many people. And dear reader, I urge you to digest the things Brayse does, moment to moment. Even the things you think aren’t a big deal. Digest and reflect.

In Saad Z. Hossain’s “The Ferryman,” Varga is a corpse collector in the distant future. The air is filled with pollution, death is rare for the middle class, and pretty much unknown to the wealthy. On the one hand, the story reads as a frame upon which the author can paint ideas. But the ideas will definitely appeal to true science fiction lovers. While a lot of the narrative space is reserved for worldbuilding, and the dialogue is, at times, a fairly obvious prompt to explain concepts, there are also significant themes on both class and caste. Varga being a “below caste” protagonist is important and socially powerful. Whereas the Elison and Older stories, arguably, could dispense with climate change elements and be pretty much unchanged, in this story, the significance of a future where science has defeated death but culture retains both class and caste should not be missed. The latter part of the tale changes direction, ultimately seeing the bereaved and hateful lady of the house become sympathetic towards Varga, and of course serves to deliver more shiny science fiction ideas. It also amps up the violence visited upon Varga. While the science fictional elements are wonderfully imaginative, readers should not mistake the generational class and caste issues, not to mention the maltreatment of Varga, as pure fiction.

Perhaps my favorite story in the book is Tade Thompson’s “Down And Out in Exile Park.” Cosmo shows up at the door of Francis Cotillard after what may have been a twenty-year disappearance. Cosmo was a friend of a friend in college, and as far as Francis remembers, was taken away at gunpoint. Now, hungry and unshowered, Cosmo shows up wanting Francis to “come see something.” I tend to be annoyed by stories that lean too hard on withholding something from the reader as a narrative driver, but something about this set up—and/or the way Thompson wrote it—is actually really intriguing. Also, Thompson’s style moves things along nicely, dropping in just the right amount of tantalizing information, switching directions at just the right time, and leaving room around interesting ideas for the reader to ruminate on subtext. Besides all this, the details of the Exile Park concept are really cool. From there, Thompson begins to layer in more ideas, to expand on established ideas, to combine them, and to take everything to the next level, with the smoothness of an expert magician. You know there are tricks involved, but damn you’re enjoying the show. Better yet, all the sparkly ideas make sense to the story; Thompson never loses narrative focus. When the ending comes, I feel like I’ve just read something incredibly well done, but I don’t have too much bandwidth to dwell on it, because the story itself has also given me a lot to think about. For me, this one is a really great read, and also happens to be one of the pieces which makes the brief integral to the story itself.

Even in the best anthologies, any given reader will find stories which work for them and stories which don’t. I think this is even truer here, given the spectrum of styles and approaches. In a sense, with just a handful of pieces, Strahan is showing us how many shapes the conversation can take, and how many tones it can have, which in itself has great value. Just as there are many kinds of science fiction reader, there are many kinds of science fictional visions, and Strahan’s book offers fantastic reading for many of us.

Back in 2020 I reviewed a previous installment in the Twelve Tomorrows series, Entanglements (bit.ly/3UT0AAa), edited by Sheila Williams. Based on these two books (and reputation) I’d say if you love science fiction, Twelve Tomorrows is a good series to get into. My one note: while I enjoyed what both Jonathan Strahan and Sheila Williams have done with their installments, and while I have no doubt that the other series editors gathered together fine pieces, it is my sincerest hope that MIT press will also move into the future, by commissioning some people of color to edit a few of these anthologies.