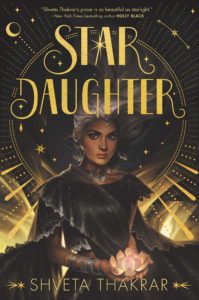 I’ve been a fan of Shveta Thakrar and her retelling of fairy tales. Now Thakrar has come out with her first novel, which is a gorgeous spin of Neil Gaiman’s Stardust from a Hindu context.

Sheetal is a teenage girl who is part human, part star. In this world, stars can take on human form and use their influence to help inspire humans to create great, memorable works. Sheetal tries to cover up her star heritage, but it tends to shine through, whether it’s in trying to dye her brilliant silver hair, or generating fire from her fingers. Even without these powers, she has to deal with dating a boy behind her father’s back and arguing with her overprotective aunt.

When her boyfriend Dev reveals that he knows she’s a star, she questions his motives in going out with her. The stress from that causes her star powers to lash out at her father, seriously injuring him. To save his life, Sheetal goes to the source of her powers—the star dwellings up in the heavens, where her mother now resides. However, instead of helping her, her mother’s family pressures her to enter a talent contest that will determine who will hold power in the heavens.

Thakrar does a phenomenal job of melding a coming-of-age story with beautiful settings, such as Night Market, a place of such whimsical mystery I was a bit sad that only a chapter was spent in it. There were times when I found Sheetal a bit too whiny and self-centered, but she had valid reasons to react to things the way she did: learning that Dev’s ancestor did a horrible thing to her own ancestor; arriving at the star court only to have the stars treat her as a lesser being; her own family blackmailing her into performing as their champion; negotiating star politics that she has no grounding in. Even meeting her mother isn’t the happy reunion Sheetal wants it to be due to her feelings of abandonment.

But tempered with the machinations of the star court is Sheetal’s music, which weaves and wraps through her blood and resounds in the air in the stars’ presence. They use it to communicate when they cannot express their emotions in mere words. Thakrar also does an excellent job of showing the tension of being bicultural and learning how to dwell in both worlds. Sheetal makes a lot of missteps, but she also learns to love and value both her heritages, with the help of her cousin Minal, who always sticks by her side and brings levity to the situation.

This was a fun read. I hope when it comes out, Thakrar will also release a playlist of harp music to accompany reading this novel. 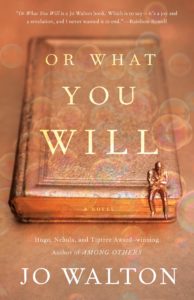 When I was in high school, I heard the song “Existential Blues” by Tom “Tbone” Stankus. I was so intrigued by the name that I started to write stories about a girl named “Tbone M. Jenkins,” someone who looked like me, but wore sunglasses, smoked cigarettes, and rode a motorcycle—essentially, a cooler version of myself. Nowadays, all that’s left of her is her name, which I use for my Twitter handle, but I don’t think the character herself went away; I think she manifested in other stories I’ve written—a hidden aspect of myself.

This is the best way to explain the narrator of Or What You Will. He’s a shard, an aspect, of Sylvia Katherine Harrison, a writer who has written over thirty fantasy novels, the most famous being her Illyria series. Sylvia has used this aspect—who has most assuredly identified himself as male, setting himself apart from Sylvia’s female identity—to inhabit her characters and give them life. He describes himself as many personas over Sylvia’s career—a king, a dragon, a wizard, a god. When Sylvia isn’t writing, he is the voice (Her muse? Imaginary friend? Alter ego? Secret self?) narrating from Sylvia’s mind; he calls it “the bone cave,” surrounded by mist, the source of her creative ideas. But Sylvia has been diagnosed with cancer and his existence is threatened, as when she dies, he’ll die as well.

Jo Walton has made a name for herself in writing books that can be considered love letters to fans of the fantasy genre. With her newest book Or What You Will, Walton takes this love a step further, writing a story about death and Shakespeare and Florentine history so meta that it’s less like reading a story and more like watching a writer create a story in real time. Sylvia is writing a story about two people, Dolly and Tish, who stumble into a mythical land called Firenze that’s frozen in the Renaissance age, where death can only come if someone wills it or if someone takes a life; a land where people live for centuries and magic is real and characters from The Tempest and Twelfth Night live and dwell.

But this is also a story about Sylvia, how she survived an abusive childhood and first marriage before starting her writing career and meeting her second husband, Idris. At the start of the book, she is learning how to live in his absence, Idris having died of a heart attack after a long, happy marriage. As the book winds on, Sylvia and the narrator ruminate on death, gender identity, and going to cons. At some point, she goes to the real Firenze in Italy, where she walks around, eats in cafés, and converses in her head with the narrator. She even adds Dolly and Tish to one of these walks, conversing with them along with the narrator. The next scene is back to the mythical Firenze, where Dolly and Tish are informed that they had vanished for a brief time, and they talk about being whisked to a godlike vision set in 2018 where they viewed strange horseless carriages and other sights.

It’s all delightfully meta. Sylvia Harrison feels so real I had to check to make sure that she wasn’t actually a real person. At another point, the narrator addresses the reader directly, as if all of us, reading the book, become characters of the book ourselves. Like many of Jo Walton’s stories, this is not for the casual reader, but it’s ambitious and fun with her typical wry humor and a nod to SFF giants in the field, not just classic ones, but also contemporary ones (Sofia Samatar gets a mention that made me shriek with delight). I love Walton’s take on writers being gods of their own worlds. But gods themselves can be vulnerable; and that those who know writers best are their characters . . . and maybe the readers, who are occasionally let in on the joke. 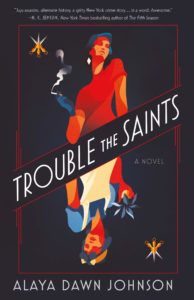 Trouble the Saints, written by Alaya Dawn Johnson, is a crime noir story mixed with juju. It’s a ghost story, but the spirits haunt the wrong people. It’s a revenge story, but one that never is fulfilled, as the crime goes so deep, it feels near irredeemable—yet, there is always hope.

Pea goes by many names: Phyllis LeBlanc, Phillis Green. But she is best known as an angel of justice, a holy knife. She has a gift for throwing knives that is supernatural. She’s employed by a mobster named Russian Vic to kill people who had done horrible things—mainly working as a vigilante, but after killing a man who had worked for Vic, she questions his true use for her and is thinking about retiring from her profession. Unfortunately, it’s not an easy thing to do. The man’s girlfriend is now out for revenge. Further, there’s been a series of grisly murders, which leaves behind victims with their hands chopped off.

Pea has been gifted with hands—a calling that is bestowed on people of color that gives them abilities beyond what’s considered normal. For some, it gives them psychic knowledge that enables them to see people’s memories and inner thoughts. For others, it gives them skills beyond the ordinary, like Pea and her accuracy with knives.

The book centers on Pea, her lover Dev (what are the odds that I read books back to back who both have a Hindu male character named that?), a bartender-cum-informant, and her best friend Tamara, a dancer who is sweet and seemingly lighthearted on the surface, but knows far more than she should and who has her own talent of using playing cards to divine the future, a talent not necessarily from the hands, but from something older, deeper.

At first glance, this is a crime noir story set in Harlem during World War II. But it’s also about the nature of justice and how it’s often denied to those who have no power. In a world ruled by Jim Crow, Pea, Dev and Tamara have to bear the brunt of slurs and the need to drive to out-of-the-way hospitals if doctors refuse to treat them at all-white hospitals. Even their names are reduced in derogatory ways: when Dev takes Pea to his hometown in Albany, he is referred by the whites there as “Davey,” as it is easier and more conforming. There is also a heartbreaking subplot of a black boy who also has “the hands” and his mother, who is trying hard to protect him from the whites who fear and resent his power. The pain and harmful bigotry they suffer can only be wiped away with real justice, but when that doesn’t happen, what then? Only the power of the hands will do so, and they are much more unforgiving if those demands aren’t met. For the hands contain generations upon generations of pain from blacks, indigenous folk, and other races shoved to the margins, and the longer they wait, the angrier they get.

As I write this, riots are happening all over the country due to the killing of George Floyd and so many other black people who have been killed unjustly. Everywhere, black people are demanding a wrong be made right, which starts with the simple act of seeing them as human beings, first and foremost. Trouble the Saints is a clarion call, an invitation from Johnson to enter the lives of people who had to deal with racial injustice, something which has followed us into present day and challenges us to make things right. The question is, are we capable of doing that?