We have original science fiction by Matthew Kressel (“Still You Linger, Like Soot in the Air”) and Katherine Crighton (“Sing in Me, Muse”), along with SF reprints by Caroline M. Yoachim (“The Shadow Prison Experiment”) and Sam J. Miller (“My Base Pair”). Plus, we have original fantasy by Benjamin Rosenbaum (“All Those Guardians of Order and Clarity, None of Them Can Abide a Free Witch”) and KT Bryski (“The Bone-Stag Walks”), and fantasy reprints by Eden Royce (“Miss Beulah’s Braiding and Life Changing Salon”) and Carrie Vaughn (“The Huntsman and the Beast”). All that, and of course we also have our usual assortment of author spotlights, along with our book and media review columns. Our feature interview is with Andrea Hairston. 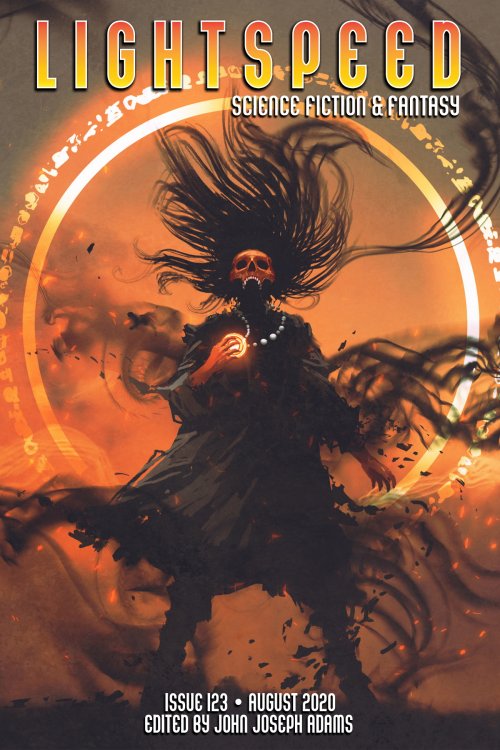 Be sure to check out the editorial for a discussion of this month’s content, and all our news.

The shopping district was crowded on a Sunday afternoon, and Vivian Watanabe was out running errands with her sixteen-year-old, Cass. Together they wove through throngs of shoppers wearing customized skins or the generic default. Vivian wasn’t fond of Generics—they fell into that uncanny valley between a nondescript human and a silver android. Cold and impersonal, plus it was hard to keep track of who you’ve interacted with.

All These Guardians of Order and Clarity, None of Them Can Abide a Free Witch

You don’t know about me, unless you read that fine and fancy text, the one called “A Siege of Cranes, or Reports of the Journey of the Human Peasant Marish-of-Ilmak-Dale and the Keeper Envoy Kadath-Naan, and Their Encounter with the So-Named White Witch, Agent of Unmaking and Despair, and Metaphysical and Xenobiological Observations Thereto.” But that’s all right. That text was written by the Djinni Az Yeshedurran Ra’avar Lakash, who tried to tell the truth, I guess.

Before having kids, I expected to love them. I did not expect that love to be so cataclysmic and terrible. I did not realize the universe would hand me a door to the meaning of life in the shape of a little person, or that invisible golden wires would extend from her every twitch and blink and pierce my skin and burrow into my core. Before I had Aviva, the worst the universe could do was kill me, and it was planning to get around to that eventually anyway.

By the time Gil had stopped meditating and opened his eyes, Muu had already removed the body. Just yesterday he and Demi had walked the eighty-four flights of stairs down to the dusty city streets, and together he and Demi had strolled across the promenade of Usha Square under the tangerine light of the setting sun. The wind had whipped Demi’s long hair into a frenzy, and Gil had leaned forward to brush a lock away from his friend’s glowing eyes.

The story is a pseudo-sequel to a story I published back in 2010 in Interzone called “Saving Diego” about two estranged friends who meet on Gilder Nefan after a decade of being apart. I’ve always loved that setting and have wished to go back to it forever. Also, at the time I wrote “Still You Linger,” I’d been reading a lot of Carl Jung, specifically his book Man and His Symbols, which explores in great detail the symbology of dream imagery and the collective unconscious.

The chime above my shop door rings. It heralds a young woman wearing a head wrap boasting a network of silvery constellations on indigo, interspersed with the occasional yellow-gold moon. The wrap itself is made of silk—not the finest grade, mind you, but sufficient to conceal what she must see as a fault. None of her hair is visible, but the contorted celestial bodies show the fabric is at the end of its tether.

This month, LaShawn M. Wanak reviews Star Daughter, by Shveta Thakrar, Or What You Will, by Jo Walton, and Trouble the Saints, by Alaya Dawn Johnson.

The kid was a cruise, you could see it in his eyes even if you’d never seen a single film made by his diminutive action star original. Something hungry flickered there; hungry and hunted. “He’s one of those kids,” you’d say, and depending on your own particular prejudices, you’d respond with disgust, lewd intrigue, inappropriate questions.

I blame authors Phoebe Barton and Derek Künsken. One day on Twitter, they were discussing the various irregularities in English plurals: mouses in houses, oxen in boxen, and hooves on the rooves. With that phrase—hooves on the rooves—I caught the feel of the story all at once. Brilliantly cold midwinter, a deer stalking the night. I’m not sure why. It’s possible that hooves on the rooves made me think of reindeer and my subconscious took a Yuletide leap from there.

Sing in Me, Muse

O Mother, dear Mnemosyne! It is I, Anisah, fifteenth of my line! Here is my song. Long have I waited for this, the end of my first shift; at last I am a daughter grown old enough to sing. I have sat at my post—I have looked out my mirrored window—I have logged my report with the cousins who keep the histories. But for you, my mother, on my first night’s watch, I will confirm that, port and starboard, there is nothing out my window but the black and endless sea.

Style-wise, I wanted to establish early on that the reader is in a sort of epic poem being written by the main character, Anisah, and so I specifically tried to reference the style of Beowulf and The Illiad—stories that generally start with the author calling the audience to attention (“Hwæt!”) or invoking a deity (“Sing in me, Muse,” the first line of Robert Fitzgerald’s translation of The Illiad, which I also cribbed for the title).

The Huntsman and the Beast

One day, long ago, a fierce storm scattered the royal hunting party. The prince, his best huntsman, twelve of his great lords and all their attendants, men and dogs and horses charged every which way, vanishing down one path and another until the prince and his best huntsman, whose name was Jack, were left alone, on foot, at the gates of a strange castle. “I didn’t know there was a castle here,” the prince said.

Andrea Hairston is the author of Master of Poisons (out September 8, 2020). Her other books include Will Do Magic For Small Change (finalist for the Mythopoeic, Lambda, and Tiptree Awards, and a New York Times Editor’s pick), Redwood and Wildfire (Tiptree and Carl Brandon Award winner), and Mindscape (winner of Carl Brandon Award). She has published essays, plays, and short fiction and received grants from the NEA, Rockefeller and Ford Foundation.