Before we get into the reviews today, I’d like to talk briefly about a dystopia. In this particular world, a world experiencing a global pandemic, protests have broken out in one of its most technologically and militarily advanced countries, spurred by justified anger over centuries of systemic racism and state-sponsored violence against a segment of the populace. Risking their lives to the pandemic, people have taken to the streets in the hundreds of thousands to register their discontent and demand sweeping change, only to be met with batons, tear gas, military force, and unprovoked aggression from the very system that claims it protects them.

I’m sure all of you have figured out by now the world I’m talking about is our own, but the reason why I’m talking about it is because far too often we as readers only think about escaping to a dystopia. We cheer for the Mockingjay, we marvel at jacking in and cyberpunk weirdness, we find hope in the Parable of the Sower and the relentless endurance it takes to survive a Fifth Season. Within those worlds, those black words on white paper, we momentarily live, but we always have the choice to leave; that if things get too tough, or too tense, or too real, we can just step away, close the cover, think of better things.

In our real world, the one we all must physically inhabit, that choice is a luxury not everyone is afforded. Black communities cannot step away from abusive police forces, from redlining and food deserts, from being strangled in the streets. Black sons cannot close the cover on a one in a thousand chance of being killed by police. Black daughters cannot think of better things when provided substandard medical care by hospitals that do not believe their pain is real. Black authors cannot wish away a predominately white publishing power structure, one which demands of them an excellence not required by the hundreds of milquetoast offerings disgorged into our collective conscience every year.

Those of us who do have the choice to look away must do so no longer. We must resist the urge to put the book back on the shelf and pretend what it describes no longer exists.

Dear readers, I wrote earlier we often want to escape to a dystopia. It’s time we start thinking of those trying to escape from one. For our first review, I’d like to highlight Trouble the Saints, by Alaya Dawn Johnson. Set in America right before the country’s involvement in WWII, Trouble the Saints follows the lives of Phyllis, Dev, and Tamara, a trio of friends/lovers who work for a New York mob boss as an assassin, bartender, and dancer respectively. At first the story resembles that of a gritty murder mystery with a splash of the occult, but as Johnson deftly peels back the layers of each character, it shifts into a tale of love and loss, of pain and injustice, and above all a scathing critique of America’s inability to grapple with its original sin.

Let me be very clear up front—this book takes a close look at multiple facets of America’s systemic racism and is not shy about calling a spade a spade. Johnson’s use of metaphor and mysticism reminded me very strongly of James Baldwin’s works, particularly the undercurrent of righteous fury at how badly the odds are stacked against Black people simply trying to live the same life as everyone else and being met with violence and hostility at every turn. Even though the book is set in the early 1940s, the circumstances the protagonists find themselves in are just as applicable today. Whether it be police brutality, exploitation of labor, or deliberate neglect of health, the forces Phyllis, Dev, and Tamara struggle against are very easily recognizable in our modern culture.

Trouble the Saints is also about so much more than just shining a needed spotlight into dark corners, though. It’s also a story of how people love each other, despite and because of their flaws, of what people are willing to sacrifice for each other, knowing the cost, of who and what you are when the world seems determined to grind you down to ash and dust. Johnson does an excellent job of interweaving poignant moments of bittersweet joy and tender thoughtfulness between the pain and terror that her protagonists must endure, and at the end of the book I felt equal parts heavyhearted and hopeful. About the only quibble I had with Trouble the Saints is that sometimes it can be difficult to follow the particulars of a certain scene due to abrupt shifts in focus and tone, but aside from that it is masterfully written and extremely timely. I hope everyone takes a chance to read it, even if the topics seem emotionally fraught.

Read if: you want to go tell it on the mountain; you know why the caged bird sings; you want to understand why things must change. 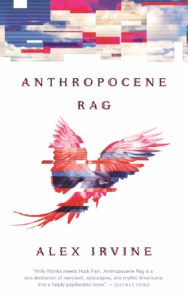 Anthropocene Rag was an oddly compelling story that I couldn’t quite put down, but it took me a while to figure out why. Ostensibly the book is about a team of six people given Golden Tickets to the fabled Monument City and the journey they take to get there, but in reality it’s an examination of the endless redefining of American myth and folklore, told through the lens of those who live it, those who search for meaning within it, and also nanotech and emergent AI because why not, those things are pretty cool too.

Reading this book was a bit like taking mild hallucinogens, in that I was never quite sure what weirdness I would encounter on the next page, but it was always a good kind of weirdness. One of the underlying foundations of the novel is that an explosion of nanotech (the Boom) not-quite-catastrophically rewrote how the world functions, which means Irvine is able to throw in every single piece of Americana mythology, from Paul Bunyan to Mickey Mouse, and it all somehow fits together. This is a story about stories, about how those stories shape us, and how we shape them in return, and what happens when something new comes along.

Fortunately for us as readers, Irvine does an excellent job of weaving together the multiple disparate elements that make up Anthropocene Rag, so while the initial shock of encountering such a strange world might be difficult to wrap your mind around, once you’ve submersed yourself in the unexpected it becomes . . . not quite familiar, but recognizable. Over there a piece of Mark Twain lives (perhaps literally!), behind that bush is the Donner Party campground (ask about their overnight rates), in the distance may or may not be Coyote chasing Br’er Rabbit, or is it the other way around?

You’ll have to read the book to find out. Just watch out for the Boom.

Read if: you read Collier’s Junior Classics as a kid; you enjoy the rich tapestry of American folklore; you’re not afraid of changing into something new. The next book I have for you is Road Seven, by Keith Rosson, and where Anthropocene Rag was quirkily weird, Road Seven is very much eerily weird. It is the tale of a research assistant who joins a famous cryptozoologist to investigate a unicorn sighting on the tiny island of Hvildarland, only nothing is what it seems at first glance. As the investigation continues, truth mingles with lie, reality’s edges blur, and sometimes what you go looking for ends up being something you don’t want to find.

Road Seven is a slow burn of a book, and Rosson gives plenty of space for the characters to reveal their manifest complexities throughout the search. Whether it’s the awkwardly tentative growth of Brian Schutt, from whose viewpoint much of the story is told, the brash brittleness of Mark Sandoval, cryptozoologist hiding a few mysteries of his own, or the multiple other characters inhabiting Hvildarland, each is brought to life with care and depth that makes the world they inhabit entirely believable.

One of the things I greatly enjoyed about Road Seven was the constant sense of ethereality that suffused almost every scene. For those of you into video games, it reminded me a lot of Disco Elysium, and how the extraordinary always seemed within reach, but never quite tangible enough to grasp. Rosson does a masterful job keeping the reader in a state of invested bewilderment, offering just enough bread crumbs to tantalize, but keeping the destination hidden until the final, unexpected conclusion. The author also has plenty to say on social issues as well, but never in a way that felt heavy-handed or obtuse, which I found fit the story perfectly.

Read if: you like The X-Files; you want to believe something’s out there; you don’t regret finding what’s really out there. For our final review this month I am thrilled to introduce you to Why Visit America, by Matthew Baker. This book is a collection of thirteen short stories that span the width and breadth of America, tackling its despairs, its hopes, its triumphs, and its failures with an eloquence and insight that frankly should be illegal for how good it is.

Baker confronts difficult issues like trans rights, the intimacies of sex work, women’s rights, and late-stage capitalism, to name a few, with grace, compassion, and dignity, and isn’t afraid to address the faults we’ve allowed to endure in our society but always with an eye towards empathy and healing. There’s also a surprising amount of humor intermingled with the heavy stuff, and several stories (in particular the eponymous title) had me laughing out loud on each page.

If there’s one thing that took me a little bit to adjust to in Why Visit America, it was the style of Baker’s writing. As someone who uses plenty of commas when I should probably be using periods, I was left in awe at some of the run-on sentences Baker constructed (one in particular goes for almost an entire page), though the way Baker utilizes them builds the environment in which they take place so intricately that you cannot help but be transported into the scene.

This book is heartfelt, the stories poignant, and while I do not know if it will win any awards, I know that it should. These are stories that will have you thinking about them for a long time after you put the book down.

Read if: you like road tripping; you care about the social fabric within which we all live; you don’t mind being attacked by the occasional herd of commas.

That’s it for me this month! Stay safe out on the streets, everyone!