We have original science fiction by Adam-Troy Castro (“The End of The World Measured in Values of N”) and Ray Nayler (“The Swallows of the Storm”), along with SF reprints by Tochi Onyebuchi (“Zen and the Art of an Android Beatdown, or Cecile Meets a Boxer: A Love Story”) and Annalee Newitz (“The Blue Fairy’s Manifesto”). Plus, we have original fantasy by Kristina Ten (“Baba Yaga and the Seven Hills”) and Mari Ness (“Great Gerta and the Mermaid”), and fantasy reprints by Benjamin Rosenbaum (“A Siege of Cranes”) and Kiini Ibura Salaam (“Rosamojo”). All that, and of course we also have our usual assortment of author spotlights, along with our book and media review columns. Our feature interview is with Alaya Dawn Johnson. Our ebook readers will also enjoy an excerpt from Ryan Van Loan’s The Sin in the Steel. 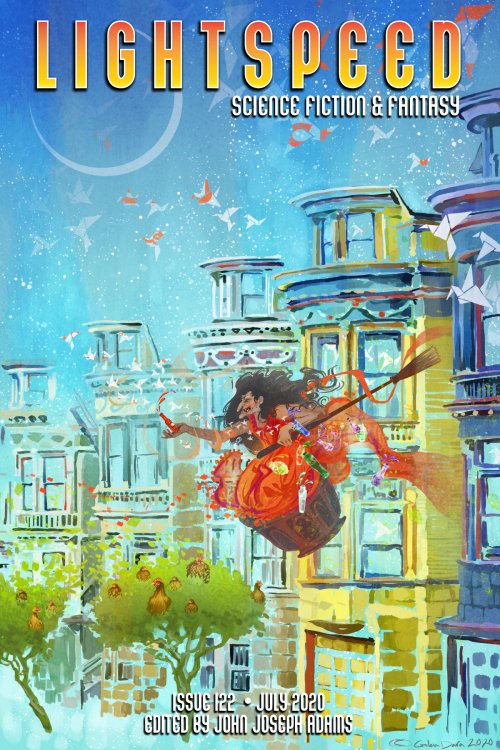 Be sure to check out the editorial for a run-down of this month’s content and all our news and updates.

Zen and the Art of an Android Beatdown, or Cecile Meets a Boxer: A Love Story

Maybe her toes curl over the edge. The view is vertiginous. Maybe her gaze is tethered to something along the horizon, so that she steps forward, to reach for it, and plummets. Past analysts and technicians and international arbitrators and project financiers and insurance salesman and automated messaging systems, past janitors and clean-bots wiping soap suds off rectangles of glass in mechanized sweeps, and is then a million custom-made, factory-spec’d pieces on the ground.

Baba Yaga and the Seven Hills

It doesn’t take long. She has few earthly possessions and her travel options are limited. There is a train that runs west through the Swamp Forest to the coast, but everyone knows and fears the old witch here, and on moving trains, she can cause quite a commotion. “Do not eat my children, Baba Yaga!” people cry when she steps onto the dining car. “Oh, please, have mercy! Do not use your pestle to grind up my bones!” She sits quietly in a booth, minding her own business.

In “Baba Yaga and the Seven Hills,” I wanted to see what would happen if I dropped this ancient, powerful force into a modern context that rendered her pretty powerless. I think it’s her ambiguous nature that made her a good character to follow to a place of vulnerability. Because, yes, ultimately, it’s a story about home and the different things home means to us. Is it where you are or who you’re with? Is it familiarity or discovery, stillness or movement? For me, there’s no easy definition.

The End of the World Measured in Values of N

Listen. The world ended thirty seconds ago. You greet this whisper with incredulity. After all, here you are, living and breathing. The people around you are living and breathing. You might be drinking coffee in lying in bed trying to decide whether to get up. You are reminding yourself of all the little life tasks awaiting you, things that need to be taken care of in order for you to continue going about your day. Thoughts of the apocalypse are a thousand miles away. Lunacy, they seem.

A Siege of Cranes

The land around Marish was full of the green stalks of sunflowers: tall as men, with bold yellow faces. Their broad leaves were stained black with blood. The rustling came again, and Marish squatted down on aching legs to watch. A hedgehog pushed its nose through the stalks. It sniffed in both directions. Hunger dug at Marish’s stomach like the point of a stick. He hadn’t eaten for three days, not since returning to the crushed and blackened ruins of his house.

“Do you want to live free or die like a slave in this toy factory?” The drone hovered in front of RealBoy’s face, waiting for an answer, rotors chopping gouts of turbulence into the air. Its carapace was marbled silver and emerald blue, studded with highly reflective particles, giving it the look of a device designed for sparkle-crazed toddlers. Perhaps it was, or had been, before it injected malware into RealBoy’s mind and asked its question.

Neverland has pirates and mermaids, making it the perfect setting for a story about pirates and mermaids! Especially since the novel assures us that most of the Neverland stories have not been told. But also, for all of its enticements—nothing but play and ongoing adventure!—Neverland is a deeply troubling, terrifying place, more so than the other famed childhood worlds of Wonderland and Oz and Narnia. And that makes it a rich source for stories.

The Swallows of the Storm

One of the Senators cleared her throat, turned on the microphone in front of her, and began. “Would you like to tell us when you first became aware of the phenomenon, Doctor? Perhaps that would be the best place to start. We can formulate our questions from there.” The hearing was not in the main Congressional building. It was in a building on another part of Capitol Hill, in a room overdue for remodeling, with drop-ceiling panels stained by leaking pipes. But the room, however humble, was crowded.

Harlan sat near the front of the room.

Eyes half closed, I see the dark of daddy’s pants. My bedroom door swings open. Light rips into my room, then disappears. I am alone now. Daddy’s footsteps get softer and softer. I can’t relax ’til I can’t hear him no more. I turn my face to the wall. My neck is sore, but that’s better than it being broke. My breath goes from fast to slow. Then I start to notice other things. Like the moon glowing outside my window. My leg shaking so hard I can’t stop it. My fists clenched tight.

I’m interested in philosophical ideas, and science, and using those things to speculate about what might be, or could have been, or about how what is happening now could be different. But at the core of it, I am interested in what it is to be human. There is so much we don’t understand at all about ourselves—even about something as simple as what it is to be a self, an individual, an entity on this planet relating to other humans, to our environment. Why am I me, and aware of being myself?

Alaya Dawn Johnson has been recognized for her short fiction and YA novels, winning the 2015 Nebula Award for Best Novelette for “A Guide to the Fruits of Hawai’i,” which also appears in The Best American Science Fiction and Fantasy (2015), guest edited by Joe Hill. Her debut YA novel, The Summer Prince, was longlisted for the National Book Award for Young People’s Literature. Her follow up YA novel, Love is the Drug, won the Andre Norton Award in 2015.