By the time you read this review, it will be November. With all the worry over the US election and its outcome, diving into fiction can be seen as escapist. However, we have always sought to explain and define truth, and one of the best ways of doing so is through our fiction, especially SFF. Books can inspire and encourage, predict, and commiserate.

I hope the books reviewed here will bring a measure of comfort. 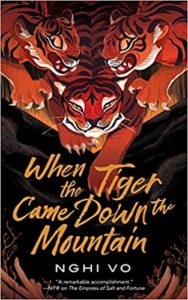 I have not yet read Nghi Vo’s The Empress of Salt and Fortune, which was published back in March 2020. So when I found out her next novella was coming out this year, I immediately snatched it up. I am happy to report that you do not need to have read the previous book. This is a standalone you can sink into.

We pick up with Cleric Chih, a non-binary Collector of Stories using they/them pronouns, as they travel with Si-yu, a mammoth rider who has agreed to escort Chih through a mountain pass. On their journey, they are ambushed by a pack of hungry tigers and take refuge in an outpost. The tigers shapeshift to the human forms of Ho Sinh Loan and her sisters to taunt Chih and Si-yu.

To stall the tigers as they wait for help, Chih tells them the story of Dieu and Ho Thi Thao, a romance between a scholar and a tiger . . . depending on who’s telling the story. This is similar to One Thousand and One Arabian Nights: Chih is telling a story to prevent the tigers from eating them and their companion. What’s lovely about this story is that Chih is not the only one telling it. The tigers interrupt constantly, giving their own version of events and in some cases repeating the same scene, but from Ho Thi Thao’s point of view. In this, a different picture of the tigers emerges. They are dangerous creatures, true, but they are also capable of love and humility.

Vo shows the importance of giving a voice to those impacted by a story. Over the long night, Chih and the tigers dialogue, correct, listen, and argue on the differences in how Dieu and Ho Thi Thao are portrayed. For instance, Chih tells how Dieu is ambushed by a family of ghosts who attempt to betroth Chiu to their oldest son. In the tiger’s version, Ho Thi Thao comes to save her, not from ghosts, but from illusion-spinning foxes. They provide clarity on Ho Thi Thao’s flirtation and wooing, much of which is misconstrued by Scholar Dieu, or is omitted in Chih’s oration. There’s a humorous moment when the tigers bicker among themselves on whether Ho Thi Thao reciting poetry is better in Chih’s version than their own. The tigers know themselves best and ultimately help Chih in making the story a fuller, more complete version of itself. You’d almost forget that they plan to eat Chih and Si-yu when the story is finished.

I enjoyed this story. It encapsulates the line from Hamilton: “Who lives, who dies, who tells your story?” I enjoyed the exquisiteness of Vo’s language where dangerous tigers recite poetry and act awkward to show love. And it whets my appetite to learn what other tales Chih plans to gather. 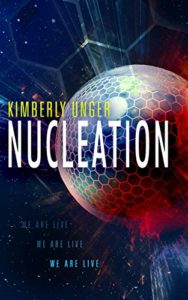 I picked up Nucleation expecting a standard space opera. What I got was a thriller that kept me occupied for days.

Helen Vectorovich is a Far Reaches operator, meaning she can control a robot in space from the comfort of a box that allows her to immerse fully into her work. Her current mission is to check on the Golf Ball, a small spacecraft delivering a payload for building an interstellar gate on a far-off star. However, when Helen logs into the robot onboard the Golf Ball, she finds crucial parts of the ship missing, and a strange dust covering everything. As she and her navigator Ted try to investigate what happened, an unexplained feedback signal knocks Helen from her access to the robot. When she awakes, she learns that the signal killed Ted.

Yanked from the mission, Helen and her team learn that the destruction came from the Scale, an unknown entity that has reprogrammed the nanobots on the Golf Ball for an unknown purpose that may interfere with the mission. Did the nanobots evolve into this new form? Is it interstellar sabotage? Or has a new lifeform taken over the ship?

Helen’s attempt to finds answers is thwarted when she is pulled off the mission and “promoted” to a desk job. Kept in the dark by her team, Helen has to defend her actions to the Far Reaches stakeholders while dealing with the loss of her navigator and enduring physical training to get back in the Golf Ball before another operator steals her spot. And that’s when someone attempts to take her life.

Unger does a terrific job of keeping you guessing at what Helen is up against. We ride along with Helen as she grows frustrated by her lack of progress, questions herself, and endures panic attacks. Helen is a checklist person who goes by protocols, but she is thrown into situations that require flexibility and quick thinking. She also has to deal with outside forces influencing her actions: rival mining companies eager to snatch the Interstellar Gate Mission for themselves, and, closer to home, competitive co-workers who have an eye out for her position.

I also appreciated how Unger’s characters were relatable and didn’t fall into stereotypes much. Even the leader of the mission, Dr. Ivester, wasn’t so much an evil power-hungry mongrel, but more of a Steve Jobs character who would push his team beyond their limits, but could also withstand getting chewed out by said team when he goes too far.

There is a large amount of technobabble, and the book ended on an anticlimactic note. Still, this is a good thriller that will hold you captive until you turn the last page. 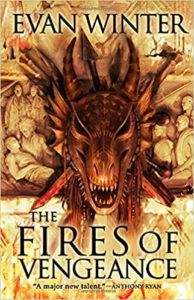 I reviewed Evan Winter’s Rage of Dragons back in August 2019 (bit.ly/2ZOXiD7), about a young man bent on getting revenge for the death of his father. Now Winter is back with his sequel, The Fires of Vengeance, where we get to see that vengeance only begets more vengeance.

The book picks up with Tau, a fighter who just has been dubbed the Queen’s Champion. He and his group of fighters will now aid Queen Tsiora in her effort to keep the throne from being wrenched away by her sister, Esi, who is aided by her own Champion, Odili. Tau is bent on killing Odili, his father’s killer, but those plans will have to be put on hold.

Queen Tsiora has her own problems. Many of the Nobles are upset that Tau, part of the Lesser Common caste, was appointed the Queen’s Champion. She must unite them back under her rule, fighting off coups and attempts on her life, while at the same time fighting against the invasion of the Xidda, the indigenous people trying to take back their land. In order to do so, she needs Tau to do some dangerous tasks. Before the story is over, there will be more killing. And Tau learns that Tsiora harbors a secret that will change how she will rule the Omehi people.

Winter really amped up the action, with most of it centered on Queen Tsiora. She’s smart and has an eye for the future, but she is not a Disney princess. The commands she gives have consequences. She will do what she needs to do for the good of her country and the will of her Goddess, whether it means ordering an execution for a pair of nobles starting a coup against her, or ordering Tau to kill a Xidda commander. Winter does an excellent job of showing many different sides of Tsiora: regal, strong, merciless, vulnerable, and questionable. Is she in the right? Is she truly doing what’s good for the country? Or are the nobles justified in rebelling against her?

We don’t know for sure, and that’s exactly what Winter is aiming for. Violence turns people into caricatures. Tau can only see his opposition as one-note killers. When he sees hints of their fuller selves—a fighter carrying a charcoal picture of her daughters, for instance—he experiences dissonance and questions himself. In a sense, The Fires of Vengeance mirrors When the Tiger Came Down the Mountain . . . with more violence.

In the last story, Tau and his fighters fought demons in the spirit world Isihogo. In this story, Isihogo is starting to bleed into the real world, to the point that Tau starts having trouble telling real people from demons. Perhaps it’s a spiritual battle, as Tau commits atrocity after atrocity in the name of his queen, hoping he could quench his thirst for vengeance. But vengeance isn’t healing; in his push to serve his queen, Tau loses much.

What struck me the most was the weariness that the Queen and most of the cast hold as tragedy after tragedy happen to them, relentless. Having endured 2020 so far, I find myself deeply relating to that. And yet, there’s a strong will in all the characters to push on, despite the horrors they’ve seen, such as the Queen’s vizier, Nyah, who may be bracing and difficult, but who also deeply cares for her Queen.

The Fires of Vengeance is a hard read that ends on a bleaker note than its predecessor, but there’s one more book to go. We’ll see just how high a cost Tau and his Queen will pay to bring about peace.