We’re breaking with our usual schedule to serialize a novelette called “Schrödinger’s Catastrophe” by Gene Doucette. You won’t want to miss either installment! We also have SF reprints by Dominica Phetteplace (“Seven Ways to Fall in Love with an Astronaut”) and Jake Kerr (“Three Speeches About Billy Granger”). Plus, we have original fantasy by Kat Howard (“The Lachrymist”) and Rati Mehrotra (“Magnificent Maurice, or the Flowers of Immortality”), and fantasy reprints by Molly Tanzer (“Le Cygne Baiseur”) and Alberto Yáñez (“Burn the Ships”). All that, and of course we also have our usual assortment of author spotlights, along with our book and media review columns. Our feature interview is with Usman T. Malik. Our ebook readers will also enjoy a book excerpt from Nicole Glover’s The Conductors. 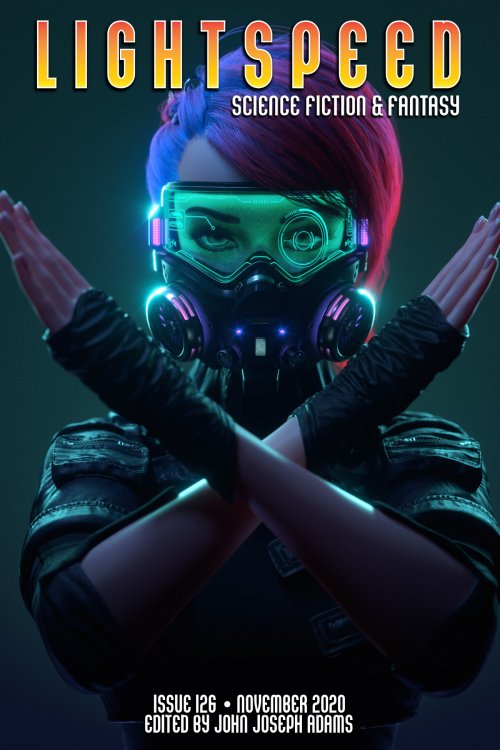 Be sure to check out the editorial for a rundown of this month’s content, and for all our updates.

Things began to go badly for the crew of the USFS Erwin around the time Dr. Marchere’s coffee mug spontaneously reassembled itself. Dr. Louis Marchere was not, at that moment, conducting some manner of experiment. Well, he was, only not on entropy and the nature of time. He was running several other tests, of the kind that make perfect sense on a scientific vessel such as the Erwin. About half of them were biological in nature, concerning how small samples of cellular material react to certain deep-space factors.

The women have gathered around Mr. Hubert, their eyes shining in the candlelight, their expressions eager. The hoops of their skirts bump and crinolines rustle as they jockey for position; looks containing entire conversations are exchanged. In spite of the lateness of the hour, the parlor is very hot. Sweat beads at the edges of their elaborate hairdos and trickles down more than one white-powdered cheek. Mr. Hubert, the celebrated toymaker, is just as turned out as the women who surround him.

This all started with the title itself. I was trying to come up with a title with a little more whimsy for my upcoming novel The Apocalypse Seven, when I thought of “Schrödinger’s Catastrophe.” It was entirely too whimsical, but I thought it was clever enough to mention it to my editor (John Joseph Adams). He agreed that it wasn’t right for TA7 but then threw me a curve by suggesting it would work really as the title of a short story. My first reaction was, cool idea but I don’t write short stories. A day later, I had the entire plot in my head.

It took twice as long to get to the third deck from the first as it did to get to the first deck from the fifth. Alice was quite certain there was no mechanism in existence capable of adding fractional decks to the ship, and so was chalking this up to another aspect of the ongoing computer malfunction. She supposed a way to validate this was to ask that the elevator stop at, say, deck two-and-five-sixteenths, but she also didn’t want to encourage the computer’s departures from reality any more than necessary.

There are no obsidian blades in the camp. The Dawncomer guards have learned enough to make sure that no ritual knives get smuggled in. Without obsidian, Quineltoc can’t spill blood properly—he can’t keep the law, can’t observe the rites of the Living Lord as a man of God must. The ghost-colored invaders who came from beyond the rising sun trust in their vigilance and in their cold technology to protect them. It does. The People make do. They’ve had to, for over a decade now.

This month, LaShawn M. Wanak reviews a selection of new novels just perfect for snuggling up with on a chilly fall day: When the Tiger Came Down the Mountain, by Nghi Vo; Nucleation, by Kimberly Unger; and The Fires of Vengeance by Evan Winter.

Seven Ways to Fall in Love with an Astronaut

We met on Mars. You had been there for two years already; I was fresh out of rehabilitation. We already knew about each other, had read each other’s files. You were an expert in highly optimized tolerance. I had seen your picture, but I had never realized you were handsome until I saw you in person. You weren’t clean-shaven, but neither did you have a beard. This is supposed to be the mark of a man who makes a good boyfriend but a bad husband.

It is not the dust that brings her tears. The Lachrymist’s house is dusty, fragments of time and memory fallen everywhere, a living blanket that drapes itself over tables and chairs and things even stranger. But time and memory are to be expected anywhere the dead gather, and even in this abundance, they do not drive her to weeping. Neither is her weeping caused by the voices, calling to each other from shadowy ceiling corners, memories still embodied, repeating phrases into the cold air.

It’s so interesting to me that you see that link to Mnemosyne in the story, and I love that you do. I often draw on myth in my work, but this time, I didn’t—at least not consciously. My conscious inspiration was the word “lachrymist” itself. It crossed my path on Twitter as an entry on unusual words (I love words and I follow multiple dictionaries). I was so taken with the definition that I decided to see if I could write a story about a lachrymist.

Thank you. Now shut the fuck up. I know you’re comedians, but we’re here to honor our own, so I swear to God if I hear one more tinkling glass I’ll shove it so far up your ass you’ll be able to toast after you finish your drink. That’s better. Now where was I? Oh yeah, we’re a classy fucking group, and this is our distinguished fucking hall. So, what can I say about Billy Grainger? Not a whole lot. He’s a fucking chemist. Ted called me and was like, “We’d like you to give an induction speech at the Hall of Fame ceremony, but it’s a posthumous award.”

Magnificent Maurice, or the Flowers of Immortality

The tree has many names, in many languages: Yggdrasil, Kalpavriksha, Jian-Mu, Ashvattha. It stands at the nexus of worlds, dark matter coiling around its roots, the rim of the universe held aloft by its ever-expanding crown. Its branches bend spacetime, its cordate leaves uphold the laws of physics, and its tiny white flowers grant immortality. Let us be more specific. One flower grants immortality, two flowers cause a prolonged and painful death, three flowers the obliteration of an entire species.

I love fairy tales and folk tales. I particularly love seeing how they intersect. Go back far enough, and you begin to see how multiple versions of a story spread over time, like tributaries flowing out of a single source. Some fairy tales are thousands of years old. We tell and re-tell them. Languages split from their roots and evolve. Wolves become bears become tigers. The monkey wife becomes a dog bride becomes a mouse maiden. Stories don’t stay the same, and they don’t just entertain and instruct.

Usman T. Malik is a Pakistani-American writer and doctor. His fiction has been reprinted in several years’ best anthologies, including the Best American Science Fiction & Fantasy series, and has been nominated for the World Fantasy Award, the Million Writers Award, and twice for the Nebula. He has won the Bram Stoker and the British Fantasy Awards. He is a co-founder of the Salam Award for Imaginative Fiction, which seeks to nurture science fiction writers of Pakistani origin. Usman’s debut collection, Midnight Doorways: Fables from Pakistan, has garnered praise from writers such as Aamer Hussein, Brian Evenson, Joe Hill, Paul Tremblay, and Man Booker finalist Karen Joy Fowler. The book will be out in early 2021.