In this article, I’m going to tell you about illusion, expectation, and the lies that your brain sometimes tells you. And I’ll explain how those lies relate to science fiction, the women who are destroying it, and the future of our society.

But before I get to all that, I’ll start with a story that is also a puzzle.

A spacecraft from the planet Earth lands on an alien world. The captain sends out a landing party, which includes Robert (a middle-aged scientist) and his strapping twenty-year-old son, Robert, Jr., also known as Bob.

An alien monster that looks suspiciously like a Tyrannosaurus Rex attacks the landing party, killing everyone except Bob, who hides in a convenient cave. The monster then turns on the ship.

For the sake of the crew, the captain must order the ship to take off, abandoning Bob. But the captain says, “I can’t leave Bob behind. He’s my son.”

Who is the captain?

I’ll give you a few minutes to think about that. But before I tell you about your tricky brain, I’d like you to take a moment to watch this video, shot at a shopping mall in Norway.

This is the Ames Room, invented by ophthalmologist Adelbert Ames, Jr. in 1934. (You can find many videos of this illusion online if you search for “Ames room.” I like this one for its brevity and Norwegian commentary.)

There’s no trick photography here—just your own tricky brain. Your brain is used to seeing rooms that are rectangular—where the walls meet the floor and each other at right angles. Your brain sees the Ames room and assumes that this room is rectangular, like most other rooms you’ve encountered.

When the woman walks across the room from left to right, she is actually walking away from you, heading for the distant back corner. As she moves away from you, she looks smaller. When she’s in that distant corner, she looks smaller because she is farther away. The slanted floor contributes to her shrinkage—the distance between the floor and the ceiling in this corner is enormous, making her small by comparison. 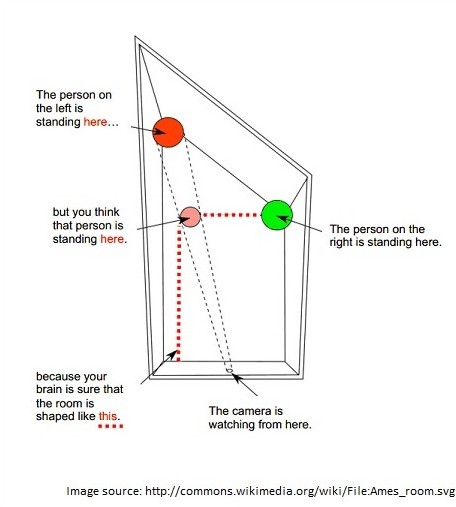 The room is dramatically distorted, but your brain insists on seeing it as rectangular. To make sense of what it sees in the room, your brain tells you that the people shrink and grow—which makes no sense at all. But still your brain clings to its belief in rectangular rooms.

Most people believe what they see. They think they see the world as it really is. But researchers working to understand human perception know otherwise. The world you see is something your brain invents from information it gathers from your eyes and interprets using its assumptions about the world. You don’t see the world itself. You see your brain’s interpretation of the world.

It’s your brain’s job to make sense of the world. Sometimes, in its efforts to find sense in a confusing world, your brain takes a short cut. The Ames room is one example of how your brain and perceptual system can take a short cut and get lost along the way. Rather than seeing what is really there, your brain sees what it expects to see.

Now let’s get back to Bob, cowering in a cave on that alien planet, and the spaceship captain who is unwilling to abandon the boy to his fate. Who is the captain? Bob’s mother, of course.

When I wrote about Bob and his mom, I based the story on a classic puzzle: A boy and his father are in a car crash and the father is killed instantly. The boy is airlifted to the best hospital in the area and prepared for emergency surgery. The surgeon rushes into the operating room, sees the boy, and says, “I can’t operate on this patient. He’s my son.”

I first heard the tale of the reluctant surgeon thirty years ago. You would think that with the number of women doctors around, this story would no longer be a puzzle. Yet when Boston University researchers Mikaela Wapman and Deborah Belle posed it to students in 2012, only fourteen percent of the students realized that the surgeon was the mother. People came up with a variety of creative solutions: The surgeon was the boy’s gay, second father; the “father” in the car referred to a priest; the story was all a dream. But the notion that the surgeon was the boy’s mother eluded most of them.

The story of the spaceship captain and the tale of the surgeon work in much the same way as the Ames room. We see what we expect to see—what we are used to, what is familiar, what has been taught to us by pop culture, by our society, by examples all around us. We see what we have learned to see: a rectangular room, a square-jawed male spaceship captain, a man in surgical scrubs preparing to save a life.

And here’s why this matters. Your brain’s unconscious assumptions—the expectations that lurk beneath your conscious awareness—can affect your behavior in ways that you may not realize or like. Consider a 2012 study, in which science faculty from a number of universities considered the application of a student for a laboratory manager position. The student was randomly assigned a male or female name. Otherwise, the application was identical. Yet men and women both judged John to be more competent than Jennifer—more valuable to the tune of $4000 a year in salary, more worthy of mentorship, and generally more likely to be hired.

These academics fell victim to what social psychology researchers call “implicit associations” or “implicit bias,” the unconscious assumptions built by social conditioning. Consciously, they may have felt they could be objective in their evaluation of candidates, treating male and female equally. But in the end, they saw the room as square.

It’s hard to change hidden assumptions, expectations that are buried so deep that you don’t even think about them. Just telling yourself that the room is distorted, that women can be surgeons, doesn’t work. Clearly it’s difficult to see the unexpected—even when it’s right in front of your eyes, even when it is the only answer that makes sense. How can we change those hidden assumptions, the expectations that are buried so deep we don’t even think about them?

In the sort of science fiction that interests me, the “what if” questions aren’t limited to changes in technology. Rather they focus on changes in society, in gender roles, in how people relate to each other and to the Others in the world around them—whether aliens or AIs.

Science fiction also has an advantage that sometimes appears to be a disadvantage—people generally don’t take it seriously. In the eyes of the world, science fiction is goofy, fun, entertaining, silly stuff, really. As such, it flies beneath the radar, seeping into people’s minds below the level of conscious thought.

The stories we read and the stories we tell shape who we are. Stories—whether jokes or TV shows or tales in a pulp magazine—shape our assumptions, our expectations, our understanding of the world. They get under our skin and show us how to behave, what to expect, who we can be.

Back in 1991, Karen Fowler and I founded the Tiptree Award in an effort to reward those writers who were pushing against expectations in gender roles, a fundamental aspect of society. The Tiptree Award, which is given out each year to a work of speculative fiction that explores or expands gender roles, was designed to help all of us learn to see and expect something different from what we have seen before.

Way back then, in an ancient time when we often communicated with words printed on paper, I wrote: “Science fiction is the literature of imagination and change. Yet all too often, our futuristic views of human roles are limited by our present world. To change the way that our society thinks about women and men, we need to show people in different roles [. . . ] The Tiptree Award will reward those who are bold enough to contemplate shifts and changes in gender roles, a fundamental aspect of any society. The aim of award organizers is not to look for work that falls into some narrow definition of political correctness, but rather to seek out work that is thought-provoking, imaginative, and perhaps even infuriating. Having one’s boundaries expanded is not always a comfortable process.”

When I announced the award in 1991, I said we would fund it through bake sales. (That was Karen Fowler’s idea; she has a wicked mind.) Ultimately, our goal was world domination through chocolate chip cookies.

That’s still our goal. I confess: I’m surprised that we are fighting the same battles today that began back in 1991, but I still have great faith in the power of chocolate chip cookies and science fiction.

The first step in changing the world is changing ourselves. And there is no better way to do it than creating new stories to live by.

For more on work by Mikaela Wapman and Deborah Belle related to the reluctant surgeon story, see:
www.bu.edu/today/2014/bu-research-riddle-reveals-the-depth-of-gender-bias

For more on the 2012 Yale University study in which science faculty ranked applicants with male names as more competent than identical applicants with female names, see: www.timeshighereducation.co.uk/421746.article

To take online tests that let you assess your own implicit associations: implicit.harvard.edu/implicit/aboutus.html

For more on the Tiptree Award, visit Tiptree.org

To read the speech in which Pat Murphy announced the award, see: www.wiscon.info/downloads/patmurphy.pdf 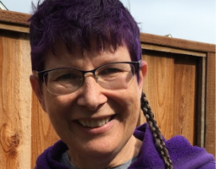 Pat Murphy writes fiction that inhabits the borderland between genres, where life is interesting and the rules are slippery. She is very grateful that science fiction exists, since it has provided a happy home for seven of her eight novels and many of her short stories. Her work has won numerous awards, including two Nebula Awards, the Philip K. Dick Award, the World Fantasy Award, the Seiun Award, and the Theodore Sturgeon Memorial Award. Her novels include The Falling Woman, The City Not Long After, Nadya: The Wolf Chronicles, Wild Angel, and Adventures in Time and Space with Max Merriwell. Her short stories are collected in Points of Departure and Women Up To No Good. With Karen Joy Fowler, she co-founded the James Tiptree, Jr. Award, an annual literary prize for science fiction or fantasy that expands or explores our understanding of gender roles. In her day job, she is the resident Evil Genius at MysteryScience.com, where she creates science activities to inspire and amaze elementary school students.