It could be said that women invented science fiction; after all, Mary Shelley’s FRANKENSTEIN is considered by many to be the first science fiction novel. Yet some readers seem to have this funny idea that women don’t—or can’t—write science fiction. Some have even gone so far as to accuse women of *destroying* science fiction with their girl cooties. So to help prove how silly that notion is, LIGHTSPEED’s June 2014 issue—our fourth anniversary issue—is a Women Destroy Science Fiction! special issue and has a guest editor at the helm. The issue features original fiction by Seanan McGuire, N.K. Jemisin, Carrie Vaughn, Tina Connolly, Heather Clitheroe, and many more. Plus, there is terrific nonfiction from Pat Murphy, Mary Kowal, and other talented women. 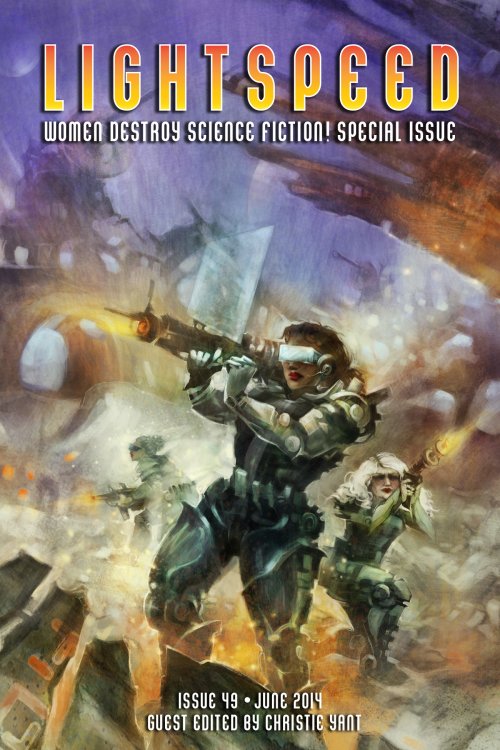 Why “Women Destroy Science Fiction”? My hope is that one or more of these stories will reach a reader who never realized that kind of story is science fiction, too, and will seek out more like it. And I hope that one or more will convince those writers—the fantasists, the poets, the ones more comfortable in Middle Earth or the Midwest than on Mars—that they, too, can create science fiction stories and participate in the expansion of the field.

The dead man sits in the corner of the chamber enclosed by spaceship on all sides. He takes up a lot of space. He has been there for three days.

I’m the sort of person who can easily accidentally vanish into writing for weekends at a time, and never manage to see the sun. I’d say the major difference between me and Maureen is that I really try to avoid falling into that mode unless I have a project to finish. For her, it’s her default mode and pretty much her entire mechanism for coping with the world.

The smell of damp steel assaults my nose as I walk the hall, uncomfortable boots clumping heavily with every step I force myself to take. The space is tight, confined, unyielding; it is like living inside a coral reef, trapped by the limits of our own necessary shells.

I spent a lot of time at the aquarium! I love the ocean. The mysteries of the deep sea are one of my favorite things to explore when I get bored. So I really just used several years of cumulative research, all in the same place.

We could not have put this issue together without the help and support of our wonderful Kickstarter backers—all 2801 of them! One of the secondary Kickstarter rewards allowed backers to add their name to a list of donors that would appear in the published issue. About half of our backers chose this reward. We’re excited to recognize them here.

A huge team of amazing women came together to assemble the Women Destroy Science Fiction! special issue (along with a few guys who helped out in some non-editorial roles). So here’s a huge THANK YOU to everyone who helped out putting the issue together. In addition to all of the wonderful authors who contributor to the issue, here’s a list of all the people who had a role in making the issue happen.

Love Is the Plan the Plan Is Death

—I am hugely black and hopeful, I bounce on six legs along the mountains in the new warm! . . . Sing the changer, Sing the stranger! Will the changes change forever? . . . All my hums have words now. Another change!

I think of the story as a response to Heinlein’s The Puppet Masters, and to similar science fiction of the era. A lot of that fiction reflects the paranoia of privilege—fear of a more (theoretically) egalitarian political system like communism, fear of external threats because the straight white men of the time simply assumed they would continue to dominate women and people of color within their own societies, and so on.

The opportunity for me to invite other artists to be a part of the project was nothing short of breathtaking. Li Grabensetter with her beautiful handling of inks and watercolors, Elizabeth Leggett with her brilliant digital renderings, Christine Mitzuk’s rich painterly style, and Hillary Pearlman’s fantastical tinkering bring the fiction in this issue depth and texture

I’m fascinated by the concept of AI and—if we ever do create sentient machines—where the line will be drawn between human and machine. I don’t think it will be human goodness that will set us apart from computer brains, but rather the dark side of human nature: our neuroses, our crimes of passion.

“You two ready?” I ask. “Yes, ma’am,” Gert says with forced brightness, and Rally nods quickly, a shake of motion behind her helmet’s faceplate. She’s nervous, but she always seems to be a little nervous, so I’m not too worried.

A Guide to Grief

You love someone. A boyfriend, who hogs the covers and pisses with the bathroom door open. Your mother. Your little brother—he never calls, communicating instead via selfies verging on the ridiculous and too-brief texts.

You are fifteen when you get the brochure. See DANGEROUS EARTH-POSSIBLES! Become a Hero! The ad blinked at you online, between the x-ray glasses and the grainy picture of how to lose fourteen pounds and get real wings

Some people will do almost anything to wipe out a debt. You, Jessica, are no exception. When the casino men came to your dingy apartment to collect, what did they threaten you with? A bat to break your legs?

Judy says, “It’s snowing.” I look out the window. The sky is the same dirty grey as the snow left from last week’s storm. I stand up to look closer, to find a backdrop against which I might see what she sees.

Your brother’s bones, suspended in mineral fluids, turn as smoothly and shine as brightly as the oil-coated joints of the mechanism they guide. When you touch the heavy plastic that separates you from his body, it is cold. The iron plate that serves to cover what is left of his face turns towards the tapping, and nausea wells deep in your throat.

The Case of the Passionless Bees

Of all the strange sights I had been privy to during my acquaintanceship with that illustrious detective, none was as disturbing as seeing my old friend covered in bees. Naturally I was not concerned; his manaccanite skin was impervious to harm and I myself was at a safe distance, ensconced behind the clerestory window at Shading Coil Cottage.

The kids know he’s coming to visit. They’ve been texting him to tell him about the snow and how cold it is, and they helpfully send links to their Amazon wish lists with pages of moon-eyed dolls and odd sets of dueling robots and creatures sold according to series. The things they like are incomprehensible to him, but they know he’s good for it.

I’m fascinated by the idea of Distributed Arbitrage and the forecasting, and I know I’m not done with Spencer or Megan. I’m not sure what it’s going to look like, but I think I’ve got the beginnings of a novel in me. And at the end of the day, I want to hear that William Gibson read my book and liked it.

I got the call in the middle of the week, when I came wheezing home from my uphill late-afternoon run. I didn’t recognize the voice on my computer’s answer-phone at first, although I thought it sounded like my best friend, Denise. There was no video feed, only the recording, and the words were so improbable they only confused me more.

To me, clones are nothing more than glorified offspring—they have identical genes, but they’re shaped by their experiences just as we were shaped by ours. My clone, in a different environment, would be very different person. The question I always asked myself was: Who are these people who are so eager to clone themselves?

In this article, I’m going to tell you about illusion, expectation, and the lies that your brain sometimes tells you. And I’ll explain how those lies relate to science fiction, the women who are destroying it, and the future of our society. But before I get to all that, I’ll start with a story that is also a puzzle.